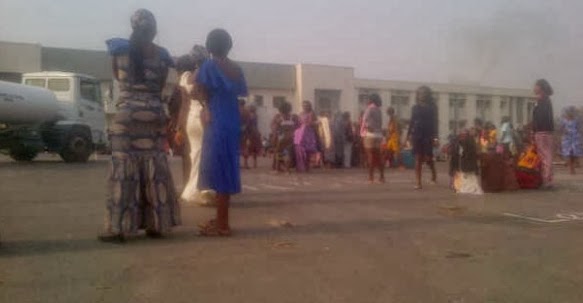 2 students were injured in a fire which occurred at the female hostel of the University of Abuja on Sunday.

The News Agency of Nigeria (NAN) learnt that the fire was caused by a gas cooker which exploded.

A security officer, Mrs Fatima Salawo, who said that she was the supervisor on duty, told NAN that the incident took place around 8.25 a.m.

She said that the fire broke out as a result of a leaking gas cylinder, belonging to a 100-level student in the Department of Micro Biology, simply identified as Lilla.

“i heard students shouting and on getting there, I discovered a fire outbreak, resulting from a gas cooker explosion.

“The 400-level student, who suffered serious burns, was sleeping when the fire broke out. We did our best to put out the fire before the arrival of firefighters,”she added.

The hostel porter, Ms Sikirat Shiadu, said that students had always been warned against cooking in the rooms where they slept.

She said that the university authorities had provided a kitchen in the hostel for cooking, advising the students to cultivate the habit of using the kitchen to avoid the recurrence of such incidents.

She said that the authorities were aware of the incident.