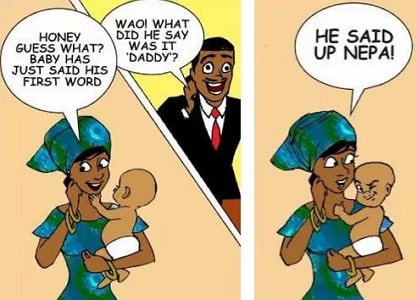 Social problems confronting Nigerians are expressed in different social spaces: churches, mosques, beer parlours, stadium, recreation centres and schools to mention just a few. In these spaces, Nigerians share palatable and unpalatable life experiences confronting them. The church has become one of such space where life stories are told and right or wrong attributions are made. And it is funny how religious instrumentalism enters Nigeria’s governance failures. Does God supply electricity? Church programmes are organised or structured in different ways but virtually all churches make out time to accommodate testimonies. By allowing this, the pastorate of the church utilises the shared testimonies to justify their calling and to provide evidences that God is working in that church.

The assistant pastor in a church I attended invited this young man to give his testimony. Hear him: I was glad when they said unto me let us go into the house of the Lord. I want to thank God for making me to be alive….I also want to thank God that for several weeks there was no light (electricity) but before coming to church this morning, we had light. Praise the Lord! You will indeed praise the Lord with him when you know how this critical asset holds the key to unlocking many livelihood challenges confronting Nigerians, particularly the hoi-polloi.

Central in this testimony is the problem of electricity. Although he could not go into the details of how non-availability of electricity has affected his life chances during the short time allocated to him, the sociologist in me observed the mood of the congregation alongside their verbal and non-verbal responses. It was least expected as a testimony since many Nigerians lack of electricity has become a culture passed across to the new born who join in shouting UP NEPA! when power is restored for few minutes. There is nexus between poverty and electricity. There is a nexus between electricity and productivity. There is a relationship between electricity and employment/unemployment. To underscore the importance of ‘light’, the creation of the world by God did not commence until there was light. The beginning of humanity was without form and ugly without light. Little progress was made until there was light. As documented in Genesis, no creation was made without light—every creation made by God came after he saw that it was beautiful.

Light (electricity) is crucial to the making of healthy citizenry and economy. Consider how many companies have folded up because they incurred more cost in trying to generate power and they cannot sell what they produce beyond what the people will buy. Unable to break even in Nigeria, they migrated to other African countries where there is power and cost of production is less. The implication of that is unemployment. When breadwinners are out of jobs, then all their dependants are plunged into the debilitating consequences of job loss. Power is also central to the conduct of research and teaching. Nigerians universities are not even funded enough to undertake researches that will make ivory towers power independent. Go to universities in Nigeria, teaching and research are executed through generators. The noise pollution makes teaching terrible and assimilation is disrupted. Like the larger pool of Nigerians, students and lecturers go about with their phone chargers and struggle to get to the socket when power is restored in the course of lecture! Students protest against epileptic electricity supply because they can’t study or get water to take a bath. Business concerns are forced to go on inverters. The customers whose salaries have not been increased since 2003 pick up the huge bills of government failure! And yet we wonder how we arrived at the exalted position as the poverty capital of the world where the richest man in Africa domiciles?

Prominent on the 2018 Nigerian budget is millions of naira earmarked for maintaining generators! Even the Ministry of Power, Works and Housing is unsure of having power as it allocated millions for generator maintenance! The presidency, National Assembly, state governments run on generator as authentic power supplier while publicly generated power is a substitute. Pepper grinders in my youthful days operated on electricity but that is not the story under democratic Nigeria. They are permanently on generator grinders while customers bear the high cost for grinding. Those who cannot afford generator-powered grinders are out of business and face the consequences—lack—poverty.

We see, therefore, that the social-economic binaries of Nigerians into the governors and the governed; haves and have-nots; and the real and ordinary Nigerians, indicate that just like actors on the social world who play different roles, social realities is differentially experienced. Everyday tensions and encounters which ordinary Nigerians faces only exist in the sufferers’ imaginations as such do not exist in the world of real Nigerians. To the real Nigerians who are members of the ruling party, either at the national or sub-national level, APC or PDP, APGA or ADC, any reality which touches on the challenges facing the masses are either denied as non-existent or technically neutralised as sponsored by the opposition. Political denial of existential problems by key political and public office holders is the reason why we are still where we are: battling troubles which many serious countries with responsible leadership had solved decades back. This is our reality; this is Nigeria. Unfortunately, reality, for Nigeria rulers, is only a reality when the colonial homeland says so. That is, poverty is real when it comes from the mouth of Theresa May, and poor funding of education and health sectors by the Buhari Administration is real when Bill Gates says it.

At this moment, President Muhammadu Buhari who is seeking re-election does not know where power is. If electricity supply has improved, how come government still budget that much for alternate supply? Nigerians are asking the ruling party to provide electricity. Light is key to making our lives better and reducing the population of Nigerians currently held captive in the cave of poverty. The faces of over 20million unemployed, over 4million peoples who lost their jobs in the last three years, the millions of unpaid civil servants and over 90million suffering Nigerians are ugly. Only those ruling have beautiful faces. Until the problem of electricity is fixed and current budgetary allocations made to service generators are channelled to more life-changing issues, poverty will continue to win more souls. God ensured that we have greater visibility during the day and lesser darkness at night because of the expected productive activities during the day. But in Nigeria, reverse is the case—longer darkness and less light.

When shall we get to the end of the tunnel to see the promised light? When shall we stop shouting up NEPA!? When will Nigerians stop using restoration of electricity as testimony in churches? When will the ruling class whose cronies make billions through generator importation and merchandise allow the greater people of Nigerians experience greater happiness? Nigerians need to negotiate this with aspirants ahead of 2019. Otherwise, praying to God to restore electricity, a misdirected payer point, will not cease from our mouths.

[About the author: Dr Tade, a sociologist wrote this piece via dotad2003@yahoo.com]

Continue Reading
You may also like...
Related Topics:culture, nigeria, up nepa

My Boyfriend Wanted Sex And I Gave Him! Will God Ever Forgive Me?
Sunday Inspiration: The Simplicity Of Jesus Christ