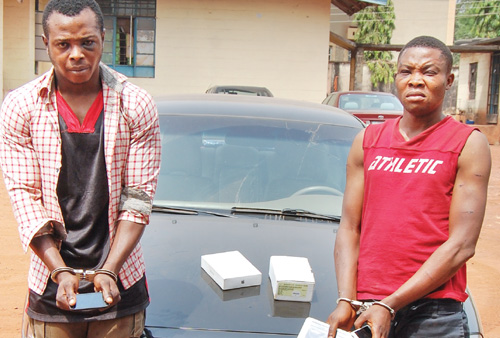 2 undergraduates of the Ebo­nyi State University, 26-year-old James Okoh and Victor Uchenna Okefie, 27, are now cooling their heels in the cold embrace of the of the Anti-Kidnapping Squad, AKS, where they are being interrogated, following their arrest by the Enugu State Police Command.

Okoh and Okefie, who had been at large, allegedly conspired to murder, Mrs. Stella Uhuo, a US-based lady who was visiting home on vacation.

Prior to the dastardly act Ohuo had been a benefactor to Okoh, a final year Sociology student of the university, who hails from Amata in Afikpo North Local Government Area, Ebonyi State. She asked members of her family to come to the airport to receive her.

She was said to have intimated Okoh about her planned visit and requested him to come to the airport so that he could take her to Abakaliki to deliver some luggage given to her by some friends in the United States for onward delivery to their families.

On the fateful day, November 14, 2015, the Commissioner of Police, Mr. Nwodibo Ekechuk­wu, told our reporter that the family of the deceased joyfully turned out at the airport to receive her. Okoh also came with his friend in a Volvo car.

Her personal luggage were put in the car brought by family, while the ones she wanted to take to Abakaliki were loaded into the boot of the Volvo car with registration number Lagos EKY 855 CY. After the exchange of pleasantries, the family left while Ohuo, Okoh and Okefie headed to Abakaliki. The time was about 10.00am.

Okefie sat at the back of the car while Okoh drove with Ohuo sitting in front, completely at peace, unknown to her that they had a heinous plan. Along the way, Okoh diverted off the busy Enugu-Abakaliki road, to a side road away from passing cars. From the back, Okefie lunged forward, grabbed Ohuo by the neck with a choking hold while Okoh viciously hit her on the head. Then Okefie strangled her. When her legs ceased kicking as life ebbed out and her heart stopped beating, the duo, still acting out their carefully scripted evil plan, calmly searched her and took all the money she had in dollars and her iPad.

When our reporter spoke with suspects in custody, Okoh recounted what transpired after the woman died. He said: “We dumped her corpse along Enugu/Abakaliki express road, on the Enugu State side. We took her dollars and luggage including ipad and broke the SIM cards of her phones. We ran to my hostel at Ebonyi State University and later went to Sabongari in Abakaliki to change the dollars to Naira and got over N850,000. We burnt the clothes of the deceased, and shared all the male clothes we saw in the luggage.”

The following day, after wait­ing for long and not receiving any call from Ohuo, her brother became troubled and went to the police to file a missing person re­port. At the time of the incident, Mr. Mohammed Adamu, was the police commissioner. Soon after he handed over to Ekechuk­wu, who assumed duty at the Command.

Soon after he received the case file, Ekechukwu directed detectives attached to Anti-Kid­napping Squad to commence investigation. They promptly arrested Okoh on January 29, 2016 at his hostel at the Ebonyi State University while Okefie was traced to his parent’s house at Ajaokuta in Kogi State on January 31, 2016. In the course of interrogation they confessed to the crime, and gave graphic details of how they did it.

Upon receiving news that the duo had been arrested, Ohuo’s family members stormed the headquarters of AKS, to identify them as the two people who were last seen with their sister before her death. They were shocked that Okoh who their sis­ter had helped immensely could have been the person to tragi­cally end her life. They wailed and were unable to control their emotions.

Meanwhile the corpse of Ohuo has been in the mortuary since November 14, when it was picked up from the roadside. Ekechukwu assured that the suspects would be charged to court soon after the conclusion of investigation.