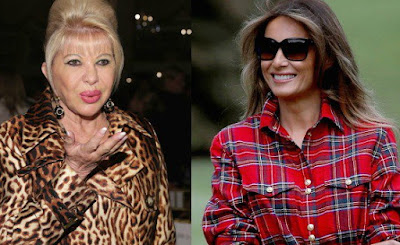 In the interview, the former wife to Trump and mother to his three oldest children while revealing that she speaks to Trump quite often and also has the direct number to the White House, described herself as first Trump wife, jokingly adding that she’s the real First Lady.

But the real First Lady, Melania isn’t seeing the humour in that and she’s not letting it slide.

Her spokeswoman, Stephanie Grisham, released a statement in response, dismissing Ivana as an ex.

‘Mrs. Trump has made the White House a home for Barron and The President,’ Stephanie wrote. ‘She loves living in Washington, DC and is honored by her role as First Lady of the United States. She plans to use her title and role to help children, not sell books. There is clearly no substance to this statement from an ex. Unfortunately only attention seeking and self-serving noise.’

Continue Reading
You may also like...
Related Topics:donald, ivana, trump

Omotola Jalade: I Lost My Dad When I Was 12 & Worked Hard To Care For My Mother
3 Nigerian Army Officers & 8 Others Arrested For Vandalising Lagos State Government Solar Panels