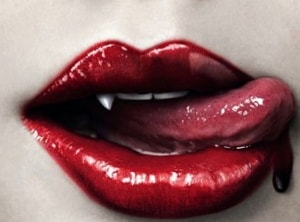 The woman pictured above is Michelle, a 29-year-old woman who recently confessed she drinks blood like water.

In a recent appearance on TLC My Strange addiction show, Michelle said she has been drinking pig’s blood since she was a teenager and now she can’t do without it.

She hails from Lancaster in California.

‘I drink it and I get energized,’
‘I wake up in the morning, I pour it into my coffee cup,’- she says

‘I prefer the gaminess, it’s a little bit saltier than the beef blood,’

She said drinking blood is the same as drinking wine to her.

While most people might be disgusted by the idea, the blood addict says it is in fact very similar to drinking wine.

What a strange addiction!