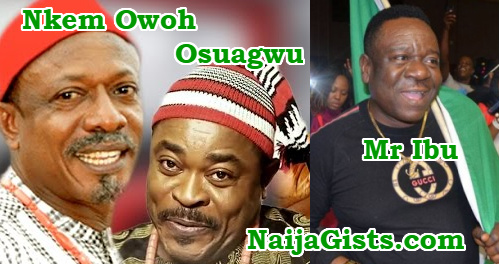 October 2nd, 2017 – Victor Osuagwu: If You Stay With Mr Ibu & Nkem Owoh On Stage And Shiver, They Will Swallow You Up

Share with us who the real Victor Osuagwu is?

Well, the Victor you see here is different from the one you see on Television, because so many people see me outside TV and say, “so you are a serious kind of person”. It is simply because I have a passion to pass so many information to people but only by acting but through other physical means. I have got passions to see my fellow human beings living a healthy life, give back to the society what they have given me and so much more. Right from my childhood days, I remember my mother telling me how I used to come to her and my grandmother to get money from them just to buy drugs for other kids who are sick.

So, I’ll say this started from my childhood days and not just because of my current status as an entertainer. Coming to entertainment, I just felt that the only way I could pass that passion and love within me is to create something that would be beneficial to people around me. That is Victor for you. I am married with beautiful kids and I have friend who think like me, those are the people that I keep as friends. A lot of people define me from my movie role, but inside me, I am a serious minded person.

What advantage does your acting role have on you?

In Economics they say there is a comparative advantage, for me, the role I act is my comfort zone. When I came in after studying Theatre Art in the University of Port Harcourt, and having a Diploma in Acting and a Degree in Directing, I always thought I would end up as one of the biggest director in the industry, but as things would turn out, a lot of challenges ad frustrations didn’t let me meet up in that area. During audition, the judges found out I was very good in acting and jobs started coming in for me not as a director but as an actor, I picked that up and it blew me.

Was there ever an early indication that you would go into acting?

I did this till about July 1995, which was the year I graduated from the university. So you can see that even from Diploma programme to my Degree programme I was still going back to the village to work with the people there. So it has always been a part of me and I believe it’s an inheritance from my mother. My mother didn’t give us millions or houses as inheritance, she only passed the gift and talent of acting to me. My mother is an excellent actor. I used to watch her when I was young in Church when she acts and she played beautiful roles. So the only will she gave me was, “Ye! Go into the world and Mumu”. *laughs* since then I have been doing it and I am enjoying it.

How many movies have you stared in altogether?

I have done so many works, but I was discovered by the marketers directly. On a particular work I did, it was entitled “The Gold-diggers”. I played the house help there. I met Clarion Chukwura, Abubakar, Tony Umez and the film was directed by Ernest. My role as a house boy in the movie was something else. I remember a particular Christmas around when Africa Magic just started; they kept playing the movie on Christmas day, New Year eve and New Year day.

The movie was just everywhere; everywhere I went people knew me and started calling my name, but I’ll say one of the biggest film I did that brought me out was the movie “One Dollar” in 2001. Same year I did “Our Daily Bread” and it took me to that high point. That’s the first time in the history of Nollywood that an upcoming act would be placed solely on the poster of a movie. When I saw the poster, my sister said “Victor, are you not the one in the poster?”

I said that couldn’t be me because I couldn’t even imagine myself on a movie poster. The poster even looked like a church poster from afar with the “Our Daily Bread” slogan on it. I had to tell the Taxi driver to stop for me to go take a closer look at the poster and my first impression was, “Could they have made a mistake?”, because I never expected an upcoming act like me to be the face of the movie.

I also did a comedy show on AIT then when they just started new, it was “Country People” then, a family comedy show and it was competing with “Candle Light” another TV Drama. I was playing Mazi Lucky in the drama series and I played the role of a very stupid person. I had to perform weekly to show my stupid side and that was how I started getting role invitation from different people.

I would never forget Amaco Investment; the man was the person who took me off from Lagos to Onitsha. He dropped 5 Thousand Naira for me as transportation fare through someone else when he didn’t see me to transport myself to Onitsha. Upon getting to Onitsha, when I was handed the script, I saw only two scenes in it that I was to play, I was wondering why I would travel to Onitsha to play just two scenes.

At first they gave me a sheet and told me to read and memorize my scene and I refused and asked for the full script, the guy was like, “full script for just 2 scenes?” and I insisted and he gave me and in less than 2 days, I had gone through the full script twice. When I finally got to the movie location, it was the first time I met Nkem Owoh, Late Same Loco Efe, Chinwetalu Agu, Amaechi Muonagor and so on. These were people I had been dreaming to meet on set and I met them on that very set.

The script was themed around the “Bakassi” issue then. To God be the Glory, Nkem Owoh was the first person I met on my scene and that was around ground breaker for me. Before I was taken back to the hotel, I had gotten another full script to play a lead role with Nkem Owoh, and that was how I started growing. I believe it was all by the grace of God.

What was your first ever payment as an actor?

It was 7 Thousand Naira; I was a big deal then, unlike people who get paid 1 thousand naira now. Then I was still in the university, in 1994 when we had the NUPENG strike that lasted about 9 months. We took off from school then to Lagos. We met with Sidney Njeala and Ejike Asiegbu.

We met them at the National Theatre, and then I knew nothing about Lagos. They had graduated then and were acting in Lagos. The film was entitled “Evil Passions”. They had already done the Part 1 and wanted to shoot the 2nd Sequel. That was my first movie and I played the role of a house boy. My first movie director was Zeb Ejiro. The day I met him and told him about that he was my first director in the industry, he didn’t remember. Also was Chris Obi Ralph, he is based in the US now.

I didn’t negotiate then as a newcomer but because movie was what I would live on. The guy first said 4 thousand naira; I refused it and asked for 10 thousand naira. He asked if I had acted before, I said no and convinced him that I was a star on stage in my school. He said he loved my guts and scribbled 7 thousand naira on a sheet and showed me and I said its okay. I didn’t receive that payment till about 4 months later and it paid me, because I was already back in school then and I was on my project. Then they don’t pay immediately, they pay after the movie had been released and the marketers have started making money from sales.

The So-called “Mumu” aspect of you on set, how do you get inspiration to play such roles?

Sometimes I don’t know how it comes. I told myself then that I had to make a breakthrough as an actor at all cost, no matter what it costs me. So, I can play Igbo, Hausa or Calabar version. Some even thought I was Calabar until I started speaking Igbo in some of my movies. In school then, they train you to play a specific role and that helped me. Since I noticed that the Mumu role could pay me, I made it into a making money venture. I just don’t know how it comes. I believe my mother was a great influence; she’s so comical and knows how to play all these type of roles.

What’s your relationship with Mr. Ibu?

We are very good friends. We have come a long way. What I love about him is his spontaneity. He always knows what to chip in when given a script. He is just like Nkem Owoh; they are a very strong character. If you stay with them on stage and shiver, they would swallow you up. It’s just there in them, you have to be strong as well to follow them up and I have enjoyed working with them.

What distinguishes your comic character from that of Mr. Ibu?

There are a lot of differences. We have different character exhibitions. He has his own way of comedy and I have mine. That’s why I always advice upcoming acts not to imitate others, because when you imitate others character, you are selling your name and fame to that character. You need to be unique and different. It’s just like Afeez Owoh, he has a unique character, same for Papi Luwe, people now imitate them because they created a unique character for themselves.