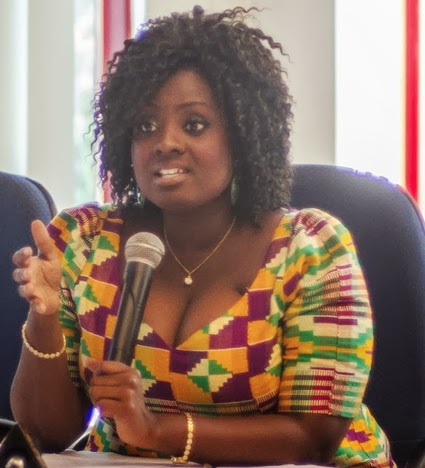 A female politician in Ghana has lost her job for her inability to bridle her tongue.

Mrs Victoria Hammah, the current Ghana’s deputy minister of communication was fired by the government on Friday, 24 hours after she was heard saying she wouldn’t quit politics until she becomes very rich by making at least one million dollars.

In the leaked tape, Victoria Hammah was speaking to a woman. Hear what she said:

“I will not quit politics until I make one million dollars. If you have money then you can control people.” “it was useless for the deputy minister to fight Nana Lithur whose husband is friends with former President Jerry Rawlings and was President Mahama’s lawyer during the 2012 election challenge. She cannot boast of 100,000 Ghana cedis or 100,000 dollars.

Victoria Hammah’s sack was made public in a statement released by the Government of Ghana on Friday however, a valid reason for her sack wasn’t mentioned in the PR.

Whaoooo Ghanaian Government are very smart at rendering quick judgement unlike Nigeria where politicians will try to cover up their blunders until it’s totally abandoned.

Back to Victoria Hammah, this is not the first time she will make a public blunder, hear what she said in a speech she gave few months back in the video below:

Victoria Hammah’s driver (pictured above) has been arrested for leaking her secret to the public after he allegedly recorded her conversation with his cell phone.

This is a wake up call for a quick turn around in the way politics is run in Nigeria.