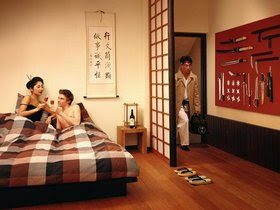 A Colombian woman who has been cheating on her husband with secret boyfriend for a long time has been caught.

The lady identified as Mayra was caught red-handed by her husband relatives while she was making love with her lover on their matrimonial bed.

The footage captured in Becerril town in Colombia, uploaded online yesterday showed visibly shaking Mayra as she lets her in laws into the flat.

She was heard asking them “why didn’t you call me and why do you want to come in now?”

Her suspicious husband relations forced their way into the flat and searched the home thoroughly only to discover her secret lover hiding under the bed.

Mayra was bundled out of the home as her mother-in-law said Mayra’s marriage to her son is over.

“My son does not deserve that. Now, you go with him. You should leave the house Mayra.” – said the heart broken mother in law

Watch the video recorded by Mayra’s sister-in-law below

Continue Reading
You may also like...
Related Topics:cheating, husband, woman