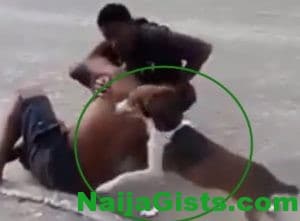 See how this compassionate dog tried so hard to separate a fight that could have been fatal.

Though we are unsure where the fight took place, all we know from this video is that from the onset of the fight, this dog tried everything possible to stop these dudes from fighting, though it didn’t work out, one can’t deny the fact that the little effort the dog put in helped calm the fight a bit.

This is one of the reasons why they say dogs are man’s best friend.

Continue Reading
You may also like...
Related Topics:dog, fight, separate

Nigeria’s Most Powerful King, Ooni Of Ife Single & Lonely As He Marks 43rd Birthday Without A Queen
US Ambassador To Nigeria Tells Okorocha Americans Are Proud Of Him Days After Erecting Zuma Statue