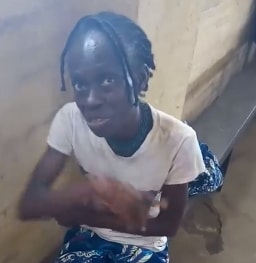 The alleged witch woman who fell from the sky and landed in the backyard of a female police officer home in Sapele Delta state police barrack was taken to court on Monday morning where she allegedly confessed.

In her witchcraft confession, she said she was heading to Amukpe Sapele in Delta state in the spiritual realm to murder one of her brothers named Fregene when her spiritual fuel suddenly dried up after a fire attack. According to her, the strange fire caused her to fall into the backyard of a police woman home from where her trouble started.

After arraignment at Sapele Magistrate’s Court on Monday, she was taken to a spiritualist to deliver her from witchcraft.

Hear her small confession in the video below