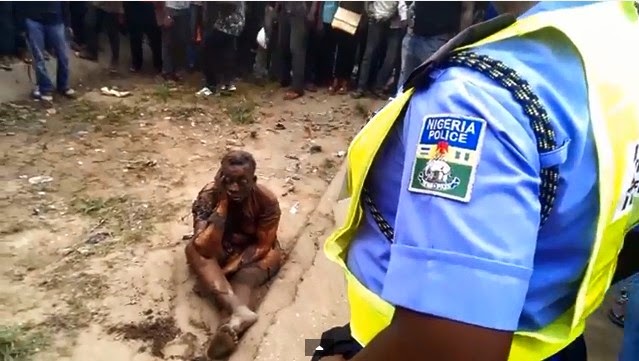 The middle aged woman who recently caused chaos at a bus stop in Oshodi area of Lagos state Nigeria has died at the hospital.

The unidentified woman was accused of being a witch after she fell from a high tension wire.

Another eyewitness has produced a new twist to the story, the witness said the woman was coming from Agbado Ijaiye and heading to her husband’s place in Mushin when the incident happened.

This is what the eyewitness said:

“It was at 12 in the afternoon. I was also at the bus stop with friends. We saw one of the birds hit a high-tension cable. It shrieked and landed on the ground. Before we took any notice, it was a badly burnt woman we saw.

“It is unbelievable but it is true. When we spoke to the woman, she claimed to have some magical powers, and had killed several people. She added that she was returning to her husband’s house in Mushin before the incident. So, some people started taking her photographs.”

Video Of Flying Bird That Turned Into Old Woman In Oshodi, Lagos

Police said the relatives of the deceased are yet to come forward to claim her corpse.