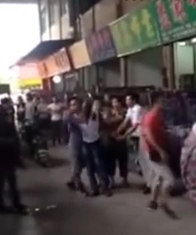 A video of over 6 Chinese citizens beating up an Igbo trader has surfaced online.

According to witnesses, the man was spotted hawking a similar thing being sold at a nearby store in the commercial area of Hong Kong when some gangs descended on him.

The Igbo trader was heard calling out for his master in Igbo language but nobody came to his rescue even his brothers distanced themselves from him for fear of being attacked.

He was beaten to a point of coma and hospitalised for broken ankle and severe head injuries.

Can a Chinese man be treated this way in Nigeria? I guess not…

Wickedness of the highest order!!!