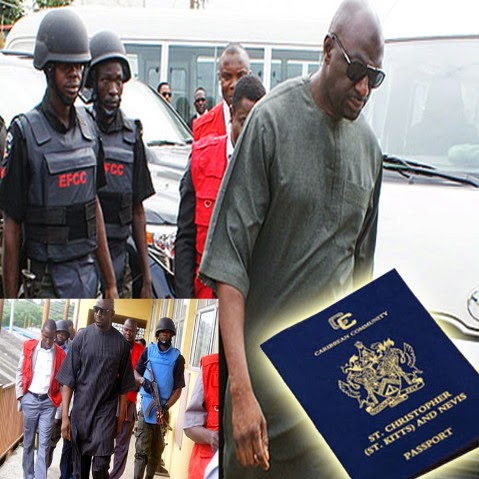 The Economic and Financial Crimes Commission, EFCC, Thursday, informed a Lagos High Court in Ikeja, western Nigeria, that an oil marketer, Oluwaseun Ogunbambo, who is being prosecuted over an alleged N979.6 million subsidy fraud, has fled to Canada.

Ogunbambo and another oil marketer, Habila Theck are standing trial alongside their firm— Fargo Energy Ltd.

At the resumption of hearing Thursday, EFCC counsel told the presiding judge, Justice Adeniyi Onigbanjo, that information at the commission’s disposal shows that Ogunbambo has absconded to Canada.

Justice Onigbanjo had on 10 February issued a bench warrant against Ogunbambo after he failed to appear before the court for the continuation of the trial.

Ogunbambo’s lawyer, Raphael Oluyede, however, dismissed the EFCC’s allegation, saying that his client was absent from court because he was recently attacked by some unidentified gunmen who had wanted to abduct him.

He, however, declined to affirm whether his client has travelled to Canada.

Moving an application which he had earlier filed on behalf of his client, Oluyede urged the court to stay execution of the bench warrant on Ogunbambo and also restrain the EFCC from arresting him.

Oluyede said this was pending the hearing and determination of Ogunbambo’s appeal against the bench warrant which had been filed before the Court of Appeal, Lagos.

Opposing the application, Jackson said the EFCC had not been able to execute the bench warrant as ordered by the court.

“We have deposed in our affidavit that intelligence available to the EFCC is that the defendant (Ogunbambo) has left the country to Canada.

“The commission is concerned because of the number of cases we have filed against him. He has abused the liberty of being granted bail and his action is making the criminal law to look like a toothless bulldog,” he said.

He debunked the claim that Ogunbambo was recently attacked by some unidentified gunmen, adding that it was evident that he was no longer in Nigeria.

“This particular application is an application that ought to be dismissed because it is an abuse of court process,” Jackson said.

The judge, however, adjourned the matter till 28 April for ruling on the application.