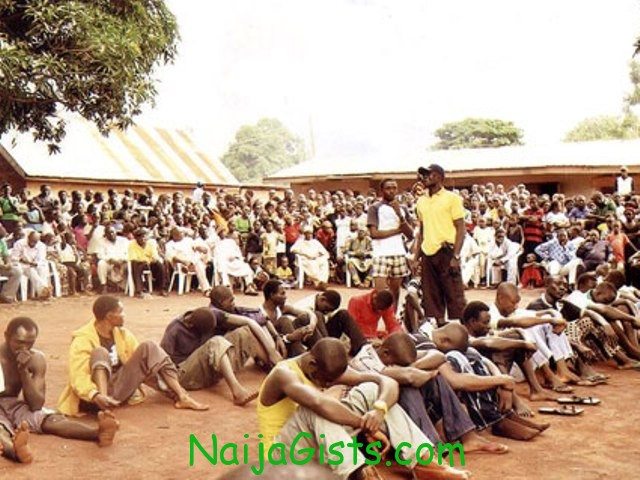 Thirty-seven members of the Vikings and KKK Confraternity cult groups who allegedly went on a robbing, killing and vandalisation spree early this week in Calabar, the Cross River State capital, southsouth Nigeria were on Friday docked before a Calabar Magistrate’s Court presided over by Chief Magistrate Emmanuel Okokon. naijagists.com

Thesuspects who were arrested on Monday, Tuesday and Wednesday while on the rampage in the city by officers of the State Criminal Investigations Department (SCID) were detained in the cells of the Police Headquarters, Diamond Hill.

From there they were taken to Magistrate’s Court 1, Moore Road, Calabar in three buses under heavy police security.

Most of the suspects who were still dressed in their regalia of jeans and T-shirts, stank badly as some of them had blood stains on their shirts while some had wounds on their bodies.

Reading the charge, a Police Prosecutor, Inspector Nku Jones said the suspects and others now at large on the 13th of March, 2012 at about “1900 hours at Lugard Street Calabar while armed with offensive weapons such as locally made pistols and machetes did attack and rob one Effiom Akpan of the sum of N500,000.”

The suspects, who were handed back their GSM handset while being taken to court, called their friends and family members and lawyers who thronged the venue of the court effectively giving the police a hard time controlling the crowd.

According to P.M, parents of the suspects, especially the women wept profusely as their children were called up to the dock and the charge of armed robbery slammed on them.

Magistrate Okokon after hearing the charge adjourned the matter till 9 April while the suspects were taken to the Afokang Prison in Calabar South, the area the cultists kept residents on edge for the three days they rampaged the city.

One of the parents, Emelogu Ikechukwu told reporters that he had done everything to ensure that his son lives a responsible life “but since he prefers guy to being a good businessman, that is his headache. After all, he is not the only child I have.”

One of the mothers who wailed profusely outside the court room narrated her plight to to reporters in Efik that she had taken the son to church thinking he was going to graduate from the university next year “to assuage me of his father’s death but he has chosen to allow my enemies to laugh at me by bringing me shame.”

Men Who Turn Into Women: See Their Before & After Photos
Boko Haram gunmen kill Pastor, village head and 8 others Kaduna