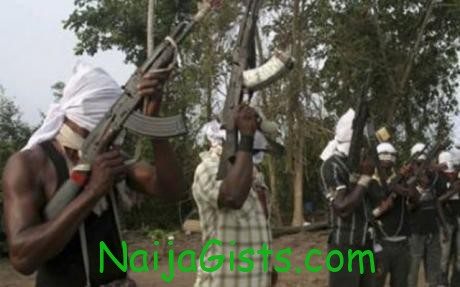 After a few weeks of respite, suspected gunmen raided some Southern Kaduna villages on Thursday night, killing 10 persons, including a pastor, in Kufara community, Chikun Local Government Area of the state. naijagists.com

Five other residents of the community, which is about three hours’ drive from Kujama, the LG headquarters, were also seriously injured in the attack.

Witnesses said the gunmen, numbering about 20, descended on three villages in Kufara community at about 10pm and continued their onslaught until the early hours of Friday.

The chairman of Chikun LGA, Mr. Auta Mamman Busa, who appeared visibly shocked and traumatised by the incident, declined comment.

A witness, Sunday Amos, who claimed to have escaped the attack, said the gunmen suspected to be Fulani herdsmen, shot indiscriminately at the villagers and at the same time set many houses on fire as residents fled.

“The gunmen were over 20 in number. They arrived at the first village at about 10 pm yesterday (Thursday). They started shooting and killing people.

“They burnt houses and moved to the next village, where they also shot people and destroyed houses and other properties. At the next village, they attacked, killed Pastor Innocent Chukwuemeka Mari of the Assemblies of God Church in Kufara in the presence of his wife and children. His wife was also shot and they only left when they thought she had died. They razed the church building,” Amos said.

Our correspondent learnt that the five persons injured during the attack had since been admitted at the Ahmadu Bello University Teaching Hospital, Shika, Zaria, for treatment.

Lawan, a deputy superintendent of police, added that policemen had been deployed in the community.