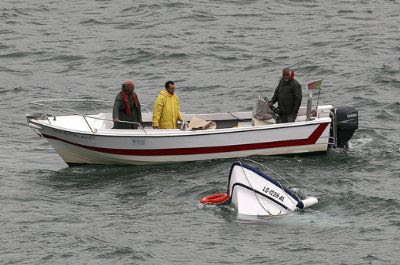 One of the boats was said to be transporting passengers to some Gbaramatu communities in Warri South-West council area when the other boat said to be carrying foodstuff allegedly ran across their boat and sank it around the Nigeria Navy Base waterfront, injuring many of the occupants.

One of the occupants, Mr. Victor Mala lost three of his children to the accident while Mrs Ebobra Newman and her husband, Ometan, from Okerenkoko with their five kids also lost three of them whose corpses have since been recovered.

Mr. Mike Oleke who lost his life had just completed the introduction ceremony of his pregnant wife two weeks earlier and was said to have sustained serious injury in the boat collision.

The incident which was reported at the Marine Police Unit in Warri is being investigated by the unit whose boss, Mr. Prest Udieyin said he was not competent to speak on the matter but promised that the headquarters would brief the press at the completion of investigation.