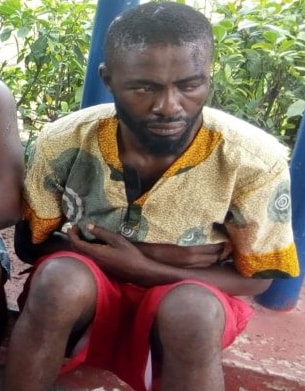 Police detectives in Imo state today arrested and paraded a suspected leader of a kidnap gang, a 34-year old man, Uchenna Ugwueze, from Obolukwu in Ihioma, Orlu local government area in the state.

Ugwueze and four others, were paraded at the Imo state police headquarters, by the state Police Commissioner, Mr. Dazuki Galadanchi, for kidnapping Mrs Evans Ajaps.

This is as Ajaps, from Amadagba Ibiasiegbe in Oru West local government area of Imo state, said that her prayer contributed to her rescue.

“My friend called me and asked me to come and carry his car that we will use it for kidnap. I was the driver. Is not long that I was released from prison and travelled to Lagos state.

“I came back from Lagos for the matter which is still in court. “I will tell something, we were four in that car and we have two local made pistols. We need money that is why we kidnapped the woman.”

Narrating her ordeal in the hands of the kidnappers, the victim, Mrs. Evans Ajaps, said:

“I was coming back from the market, when I got to the gate of my house. They rushed me as I was about to step into the compound. “They were more than four boys.

They overpowered me and dragged me into the vehicle as they were driving I was praying to God to save me. Fortunately, the car broke down on the way and all of them ran away into the bush. They also beat me very well.”

According to the state commissioner, Galadanchi,

“I will like to tell you that the policy of the Federal government that says “If you see something say something and slogan of change begins with me is working in Imo state. “It is good that you know that through our community policing method our men were given a tip off on the kidnap of one Mrs Evans Ajaps, and they moved into action and they were able to rescue her.”

“The Imo state police command in our renewed onslaught against crime and criminality in the state. “Following the shocking murder of the APC chairman in Ideato North LGA, Sunday Ijeagwu and the kidnap of the personal Assistant to Jerry Alagboso of Orsu LGA. “The police command reorganized and restrategized the security architecture to effect the arrest of the perpetrators of the dastardly acts.

“The efforts of the command operatives has paid off, resulting to the arrest of five notorious kidnap incidents in the state. “In the cause of their arrest, one victim Mrs Evans Ajaps of Amadagba Ibiasiegbe in Oru west LGA of Imo state was rescued from the kidnappers unhurt. “Items robbed from the victims include; N670,000, First Bank ATM card and other valuables.

“Suspects have made useful statements and have confessed to the kidnap and robbery of the PA, to Jerry Alagboso of Orsu federal constituency in the House of Representatives and other victims such as One Henry, Ochendu, Chidiebere and so on. They would be charged to court after investigation.”