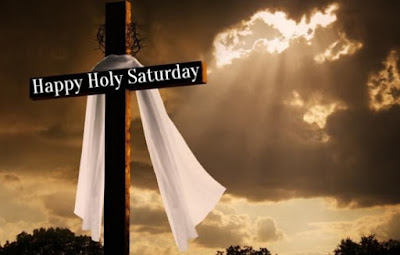 For good reason the Gospels devote a great deal of space to the events leading up to Jesus’ crucifixion on Thursday and Friday of Passover week, as well as Jesus’ glorious resurrection on Sunday, the “Lord’s Day.” Yet little space is given in the Gospels to the day between “Good Friday” and Easter Sunday, sometimes known as “Holy Saturday.”

None of the Gospels records any of the activities of the disciples on the Sabbath after his burial and prior to his resurrection, except for Luke, who simply writes, “On the Sabbath they rested according to the commandment” (Luke 23:56, ESV Open in Logos Bible Software (if available)).

However, this passing reference to the disciples’ Sabbath rest may veil the considerable inner turmoil they were likely experiencing. It is probable that Jesus’ followers were doing on Saturday what they were doing on Sunday when Jesus appeared in their midst: meeting together behind closed doors for fear of the Jewish leaders.

Only Matthew gives any concrete details as to what took place that day behind the scenes while activity was limited due to the Sabbath. According to his account, it was on Saturday that the Pharisees and chief priests came to Pilate and asked for a guard to be posted at Jesus’ tomb, saying, “Sir, we remember how that impostor said, while he was still alive, ‘After three days I will rise.’ Therefore order the tomb to be made secure until the third day, lest his disciples go and steal him away and tell the people, ‘He has risen from the dead,’ and the last fraud will be worse than the first” (Matt. 27:63–64 Open in Logos Bible Software (if available)).

It seems that the disciples were not the only ones who were afraid! Perhaps the unusual circumstances surrounding Jesus’ death—darkness covering the land, an earthquake, the tearing of the temple curtain—gave the Jewish leaders reason to be concerned. The Pharisees were obviously aware of the predictions Jesus had made about his resurrection, although they were not necessarily inclined to think that his words may actually come true. In fact, their words show nothing but disdain for Jesus whom they call “that impostor” and “fraud.” Nevertheless, it is ironic that not only were the Jewish leaders aware of Jesus’ prediction that he would rise on the third day, they acted on it, which exhibits more “faith” than Jesus’ own followers were able to muster at that time.

Pilate’s response, “You have a guard of soldiers” (Matt. 27:65 Open in Logos Bible Software (if available)), is somewhat ambiguous. It may be that the Roman governor grants the Jewish leaders’ request and provides them with a detachment of Roman soldiers. Alternatively, he may simply be telling them, with thinly veiled antagonism, to use their own temple police to do the job. In either case, he grants them permission to guard the tomb, and they proceed to do so. While the Jewish authorities didn’t believe Jesus’ words any more than the disciples did, they were adamant that the body placed in the tomb must stay there and not be removed.

In the context of Matthew’s account, these activities on Holy Saturday serve as proof that the Romans and the Jewish authorities secured Jesus’ tomb, which makes it unlikely that grave robbers (such as Jesus’ own disciples, Matt. 27:64 Open in Logos Bible Software (if available)) could have stolen the body or that it could have disappeared through some sort of foul play in another way.

In this way, Matthew sets up his narrative perfectly for what is to ensue on Easter Sunday at the crack of dawn.