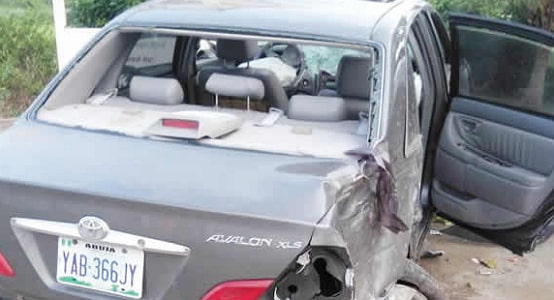 A driver rushing to navigate its way out of multiple vehicles accident scene has crushed a foreign national  to death near Danco Filling Station corridor of the Lagos – Ibadan expressway.

The multiple accidents which occurred almost in quick succession around 2:20pm, also left the foreigner’s  Personal Assistant with injuries.

The vehicles involved include Toyota hummer bus on the fleet of Iyare motors and marked AUC 258 XA, Kia(car) with registration number KSF 725 AX, blue TOYOTA jeep with registered as LND 345 CV and another.

It was learnt that a vehicle hit the man’s Jeep from the rear while returning from Akure, Ondo State, and he along with his PA, had stopped to check the extent of dent on the Sport Utility Vehicle(SUV) but while trying to enter the SUV again to continue his journey, the Kia car slammed him against a another vehicle.

The foreigner  was said to have died on the spot while his remains have been evacuated to the morgue of the Olabisi Onabanjo University Teaching Hospital(OOUTH), Sagamu.

The Public Relations Officer of the Ogun State Traffic Compliance and Enforcement Corps (TRACE), Babatunde Akinbiyi, who confirmed the accident, identified “loss of control occasioned by over speeding” as the cause.

“The white man was coming from Akure, when a car hit his car at the back. The white man and his driver came down to see the extent of the damage, but in the process of getting into the car to continue the journey, a car hit another car which in turn hit the white man.

“The car a that hit the white man and the driver have been arrested and taken to Sagamu Divisional Police Headquarters,” Akinbiyi said.