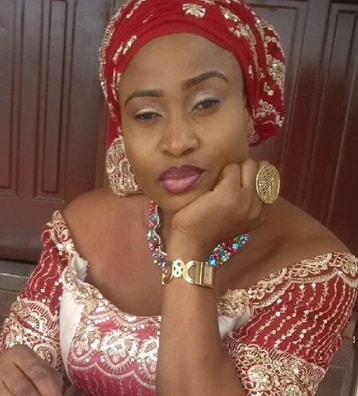 A Tribute To Late Aisha Abimbola By Yinka Ogundaisi

Not many knew she was the last of a triplet; what in her native Yoruba is known as “Etaoko” or “third stone” in a rough English translation.

According to Aisha, her mum was all prepared to leave the hospital after the birth of the preceding twins when she decided to make her entrance, and after the usual advance rumblings in her mum’s womb, she majestically dropped!

Essentially, this tribute is to afford the public and especially her numerous fans across the Diaspora with clearer glimpses of their diva’s life, to appreciate her better and strengthen her place in their esteemed memory: Aisha Abimbola Etaoko Musa Aimunisin; 19th December 1973 to 16th May, 2018.

I make emotional heroine-centric movies, telling my stories from women perspectives and family lives because my various exposures convinced me that half the problems we encounter daily in our existence today stem from instability and challenges in the homes. If we could therefore highlight these challenges and they are resolved, the problems of avarice, selfishness and related issues will be significantly curtailed, and we all would benefit from a world of bigger contentment and happiness. Aisha played the lead in my yet-to-be-released movie which followed a familiar pattern of dedication to family lives; ‘Pardonable Unforgivable’.

Professionally, I group Aisha in the same category of her seniors like Joke Jacobs, Tina Mba, Ayo Mogaji, Gloria Anozie-Young. Her role in the movie required her to be adept on “talking drum”, having been born into the family of traditional drummers, although she with her parents and younger sister were cosmopolitan and her father played by Taiwo Obileye was an affluent business contractor. Traditionally, anyone born into the lineage of drummers must master at least a traditional drum and the choice of her role was the talking drum. Her daily ritual of playing the talking drum, the ease and dexterity attracted a young professional visiting her father at home for business. They became attached, courted and got married. Despite that we could deploy technology to make her do the drumming on screen without being able to do so, Aisha preferred and did went through the tutelage on the rudiments of handling the talking drum to make her on-screen performance more natural and real.

The climax was in her dad’s remote village where she would lead the traditional drummers for a group of 700-year old heritage masquerades specially brought out to celebrate the monarch’s birthday. Almost all the members of my cast were apprehensive of travelling so far to the interior of Oyo State where we did the shooting and even the crew gave outrageous budget for their participation. But Aisha saw with me that the scene should be picturised in the village and although, it really was a first for her to travel to that part of the country, she encouraged me, cast and crew to do the job.

Dedication was another of her virtue. Around this time last year, she suffered a domestic upheaval that necessitated her family’s movement to a hotel as temporary accommodation but this setback notwithstanding, she faithfully fulfilled all her professional commitments. Another instance was when her son was hospitalised and a decision was to be taken on whether or not surgery was needed. Aisha had an uncompleted scene of few close ups, which really was for the aesthetics, but she felt her absence could mar the overall quality of the movie, so she had the boy admitted and went to finish the shoots before returning to her dear son at midnight and in compensation, refused all other jobs to enable her give her full motherly attention to the boy.

Her enterprising nature enabled her to venture into radio drama programme for which there is now a 13-episodes radio drama; “Life With Aisha” depicting a digital age woman as a daughter, wife, career woman, and mother. She also did a stage production at Terra Kulture in V.I. These experiences considerably enriched her live shows in Germany and America. There are other projects that we did together on corporate bodies’ ease of marketing in partnership with an NTA Station.

Aisha was a very private person and normally didn’t encourage professional visitors at home to avoid giving her family wrong signals, but for those privileged to see the star in her boudoir, Aisha was a homely, nice natured next door neighbour. It was normal for her to let her hairs down at home playing cards with her younger sister, enjoying groundnut and cashew nut with all the children in the house surrounding their “big mummy”. A real family woman she was, Abimbola.

She was also unpretentious. Coming out from seeing her doctor somewhere in Lekki Phase 1, the vehicle refused to start in one of those places less frequented by taxi. The diva told her entourage; “Let’s walk down to the nearest bus stop for a taxi or public bus. The world won’t collapse!” There was a place at a public market where she shopped for foodstuff, including her favourite live chicken that she normally would buy not only for her family but many of her friends. And you won’t catch her talking down on those market women.

Aisha’s love for her two kids was legendary. Diagnosed in faraway Atlanta, USA, she had the option of staying behind for necessary treatment before returning home but “staying away that long from my children would kill me. I might survive the illness but certain to have a nervous breakdown!” While at home she started making real good progress but again she had to relocate “because I need to firmly secure the comfortable future of my children” Aisha’s mum also died in her prime, saddling her with the motherly responsibility of her siblings, right from when she was an underage girl. Sheer determination saw her through her higher education at LASPOTECH.

There is no easy and painless way to say goodbye!