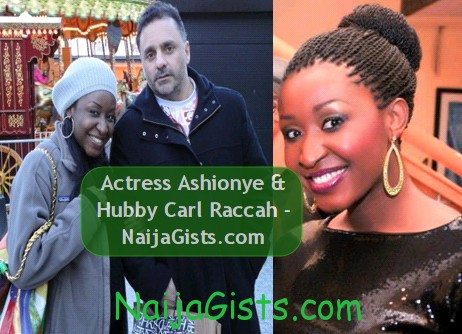 Actress Ashionye Michelle Raccah aka Ashionye Ugbo-Racca has been a subject of rumour after her marriage to a white man, Carl Raccah born in Kano State. naijagists.com

In this latest interview, the actress revealed why she opted for the Oyinbo man amongst other issues.

Is it a new trend where Nollywood stars are falling for the ‘Oyinbos’?

This is not about going for the “Oyinbo’s” or the ‘Oyinbos’ coming for us. It’s about the relationship. It’s not a matter of whether your husband is black or white. It depends on the relationship you have built over the years with him.

It depends on a lot of of things. And by the way, how many Nollywood actresses are married to the Oyinbos? I don’t see color as an individual in marriage. My husband doesn’t see color either. I believe that the actresses that you are referring to, and their husbands don’t see color too. That’s why they decided to marry. The world is one color to me, but don’t ask me which color.

You might see my husband as a white man, but I don’t see him that way. After all, my husband was born in Kano and he speaks Hausa fluently.

He is a Nigerian as much as you are a Nigerian too. So, I don’t see color in our marriage.

Wishing her success in her marriage.