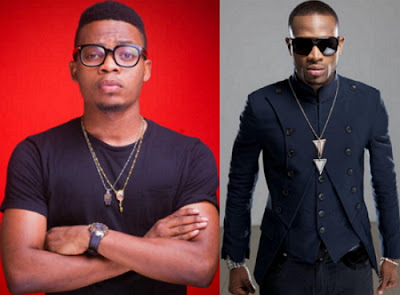 For the past few months, koko master D’banj‘s management team have been working tireless to bring rapper Olamide into their team but, the rapper allegedly turned down the offer in a bid to stand alone like Wizkid.

Olamide, who does not want to play the fool at this phase of his  career, politely told D’Banj that he was not ready to surrender some of  his powers, especially having to be booked for shows only by D’Banj’s  management outfit, pleaded for time to even think about the offer as he  still wants to work with his present team and taking things as they come  for now.

He believes that for now, there is nothing D’BANJ could do for him that he can’t do by himself.
In the future, I will consider his offer. If anybody wants me, he  should have unfettered access to me. I am just starting out in the  profession’, he allegedly told close friends.

“Apparently, he would have been blocked from having direct access to  his clients and that will reduce his share from his appearance fees. He  does not like the bottle necks and some terms that will make it  difficult for him to be reached all because D’Banj wants his value to  rise. That may happen, but what eventually gets to Olamide will be  peanuts”, A source disclosed to Tribune when asked why the deal was botched.

He added that the success that Olamide is enjoying now informed his  decision to opt out of the deal because there is nothing, apart from  management offer, that he stands to benefit from.

“Olamide can be easily reached by anybody and his fees are still  okay. The moment he signs the deal, he will be getting fewer shows,  though huge fees, but will lose many of his grassroot fans to the  elitist crowd D’Banj belongs” he added.

Since D’Banj couldn’t have the “Ode Lon Like” crooner, he has reportedly reached out to Durella.

Guess the bobo is afraid of the Illuminati stigmatization being carried by D’banj.