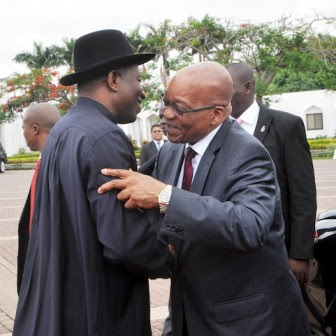 May 30, 2013 – 23 South African Landlords Chased Nigerians Out Of Their Homes Over Drug Dealing Accusation

At least 23 Nigerians were forced out of their homes and chased out of Port-Nolloth community by some South Africans members of the community, accusing them of dealing in drugs.

According to Diliora Ndubisi, the spokesman of Nigerians, the leaders of the African National Congress (ANC) Youth League in the area instigated some community members to force them out of their homes.

“They said we are the ones selling drugs to their children. They destroyed and looted our property and one Nigerian was seriously beaten and is on admission in a hospital in Johannesburg now,” Ndubisi said.

He said that the attack, which targeted Nigerians only, can be attributed to envy and jealousy about the success of Nigerian businesses in the community amidst poverty and unemployment among South Africans living in the community.

Reacting to the attack, the Nigerian Consulate in Johanneburg, South Africa today criticised what it described as the xenophobic attacks on Nigerians living in the country.

Mr. Okey Emuchay, the Consulate-General of Nigeria in Johannesburg, said in Springbok, in the Northern Province of South Africa, that labelling all Nigerians in the country as drug dealers was “unacceptable.”

Emuchay said that it was the duty of the South African police to provide safety for South Africans and foreigners living in the country.

“In as much as we will not encourage our nationals to engage in criminal activities, it is not acceptable to us that some people should label all Nigerians as drug dealers.

“If any Nigerian is caught dealing in drugs he/she should be arrested and prosecuted. But a situation where some people will act on rumours, attacking and harassing Nigerians will be totally resisted by us. If anybody has any information about any Nigerian dealing in drugs, such information should be given to the police to investigate and arrest those involved. It is the duty of the police to investigate, arrest and prosecute, and not the duty of any individual or group of persons to do the work of the police.

“In this case no arrest has been made, no prosecution and no sentencing of anybody, only some members of the community taking the laws into their hands and forcing out Nigerians from houses where they pay rent, sending them into the streets in this winter period,” Emuchay said.

The Consul-General said that the safety of the displaced Nigerians was the responsibility of the police.

“This is coming barely three weeks after President Goodluck Jonathan of Nigeria paid a state visit to South Africa, after a similar one-day official working visit by President Jacob Zuma to Nigeria.

“Nine MoU agreement were signed during the state visit to promote trade and investments between the two countries.

“If governments at the top level is working together to strengthen relations between the two countries, the people of the two countries should be encouraged to take full advantage of the bilateral cooperation in various ways, including business culture and interpersonal relations. Nigeria and South Africa have had a long history of friendship and cordial relationship and everything should be done in sustaining the relationship,” Emuchay said.

Ikechukwu Anyene, President of the Nigerian Union in South Africa (NUSA), commended the proactive step taken by the Consulate.

Brig.-Gen. Francis Hender, South Africa Police Service (SAPS), Cluster Commander, assured that no individual or group would be allowed to perform the duty of the police.

“I will go to Port-Nolloth personally to assess the situation there, and a team of crime investigators will be assigned to investigate the cause of the attack on Nigerians and the lady mentioned would be invited for questioning. She is not a police officer and cannot be allowed to get away with her actions,” Hender said.

Lebogang Abrans, ANC Regional Secretary, apologised to the Nigerian envoy on the attack and said there was need to engage with the community on how to allow the displaced Nigerians return to their homes.

Why Rapper Olamide Refused To Sign To D’banj’s Record Label
Laide Bakare On Honeymoon After Secret Wedding, Promises To Reply Ex-Husband In 4 Weeks