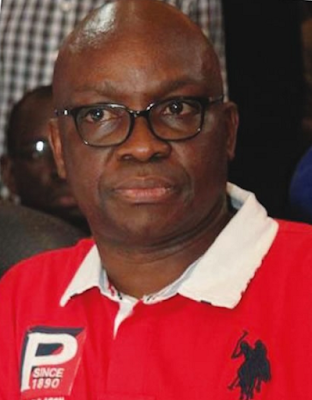 The Ministry of Finance says that the Federal Government is not withholding statutory allocation to any state.

The Director, Information, Mr Salisu Dambatta made this known in a statement on Thursday in Abuja.

He said that the claim by the Governor Ayodele Fayose of Ekiti State that the Ministry had withheld statutory allocation due to the state was incorrect.

According to him, the Ekiti State Government has failed to comply with the necessary requirements for participating in the Budget Support Facility (BSF), which is a Conditional Loan Programme to state governments.

“The programme was introduced with the view to enhancing fiscal prudence designed particularly to enhance transparency, efficiency in public expenditure and payment of salaries.

“This is not the first time of non-compliance by the Ekiti state government.

“His administration defaulted in meeting the conditions specified and agreed upon by the 35 state governments that are participating in the programme as contained in the Fiscal Sustainability Plan (FSP).

“The Ekiti state government was warned formally of its failure to comply with the full requirements via a letter on Aug. 5, 2016, with reference number HMF/FMF/ASG/1/2016.’’

Dambatta said that failure of the state government to comply with the requirements and conditions for the BSF resulted in a letter sent to the Chief of Staff to notify him of the suspension of BSF for Ekiti.

He said that the letter was conveyed to President Muhammadu Buhari before payment to the state was reinstated.

According to him, the Ekiti state government and all the other participating states are aware of the consequence of failure to comply with the full conditions.

“It is not the first time a state will be stopped from accessing the facility due to non-compliance.

“In the course of its normal duties, the Ministry of Finance has the right to query, suspend or withhold funds as part of the conditions of the BSF.

“The process is for the Commissioner of Finance of any state or the governor having issues to contact the Federal Ministry of Finance.

“This is so they can resolve the issues without resorting to the media, because such issues are of a financial nature and therefore, confidential.

“They are routinely resolved amicably by the parties involved.

“The Federal Ministry of Finance wishes to restate very strongly that the BSF is a conditional programme and the Federal Government will not be intimidated or threatened in the discharge of its duties.’’