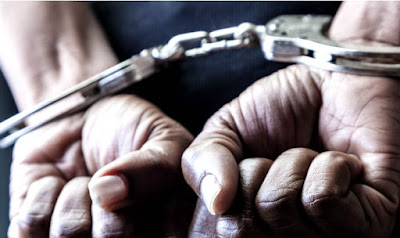 August 10, 2016 – Nigerian Man Who Tied Daughter To Ceiling Fan In Lagos, Insert Pepper Into Her Privates For Failing To Submit His Lotto Number To Agent Arrested

Okoro is standing trial on a three-count of indecent treatment, attempt to commit murder and assault.
Prosecutor Ihiehie Lucky told the court that the accused committed the alleged offences sometime in June and August.

Ihiehie said that Okoro, a furniture maker, unlawfully and indecently dealt with his daughter.
He said the step-mother, Abayomi Maria, reported that the accused always beat up the girl.

The prosecutor said the complainant told the police that Okoro had some time in June used a dog chain to tie the girl to a ceiling fan and left her there.

Ihiehie told the court that the accused tied the daughter to the ceiling because she failed to submit his lotto number to the agent.

He told the court that the indecent assault on the girl was reported by the step-mother to the Ketu Police Station.
Maria, the prosecutor, told the police that on Aug. 8 at about 8:00 p.m. Okoro called his daughter to bring her report sheet.

“When he saw that she failed, he indecently punished her. He told her to lie down and he put the dry pepper inside her private part, in her eyes and all over her body.
“Her screams alerted the step-mother who tried to stop him but he beat her up,” Ihiehie said.