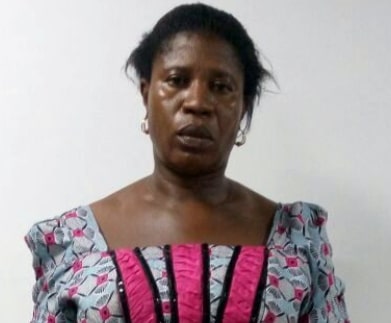 The NDLEA, has arrested a 54-year-old widow and mother of six for ingesting 60 wraps of heroin.

The woman was arrested at Lagos Airport at the weekend.

The command also arrested a 45 old man for ingestion of 93 wraps of Cocaine during the outward clearing of Passengers’to board a Lufthansa flight to Frankfurt.

Briefing reporters on the arrest, the NDLEA Airport Commander MMIA, Garba Ahmadu said, the 54-year-old woman who ingested 60 wraps had difficulty excreting 28 warps out the 60 she ingested.

He said her life was currently in danger because of the remaining wraps.

Ahmadu noted that the female trafficker Alhaja Sulaimon Kudirat Adunni who hails from Abeokuta Ogun State started having problems a day after her arrest as she developed complications, vomited two wraps of suspected substance resulting from irritation and stomach discomfort.

According to him, she coughed intermittently before she started vomiting and fainted in the process.

“She was promptly rushed to the Lagos State University Teaching hospital LASUTH. The suspect was examined by a team of medical specialists, ultrasound scan performed and CT scan was later recommended, which was immediately carried out on the suspect”.

The NDLEA Airport Commander noted that after she was certified stable, the suspect was taken back to custody for further investigation in order to unravel other possible associates that are linked to the case.

Ahmadu assured that the suspect was kept under strict observation for possible excretion of the remaining 32 wraps.

The second suspect Adindu Obinna Hyacinth 45 from Nnewi Anambra state according to the NDLEA commander did not give much problems as he excreted the 93 wraps ingested.

But, one of the wraps was in the process of almost unwrapping in his stomach.

“In the process of excretion, the suspect made the first excretion of 35 wraps of suspected hard drugs and it was observed that one of the wraps excreted was almost unwrapped”.

He added that ” the management promptly referred the suspect for medical attention at LASUTH. The suspect was observed at the hospital by a team of medical specialist and later administered some medications”.

“Subsequently, he excreted a total of 93 wraps of suspected hard drugs with a total weight of 1.620kg”.

The female suspect Alhaja Sulaimon Kudirat Adunni said she was given the drug to take to London by One Mukaila who was introduced to her by a friend.

She said she was promised one million naira.

“This na my first time”, she confessed.

The other suspect Adindu Obinna Hyacinth said he got into the illicit business because someone stole his six million naira.

” I decided to embark on the journey because someone stole my money.”

He said one Chuks promised him 3,000 Euros if he was successful in taking the drugs to Frankfurt.