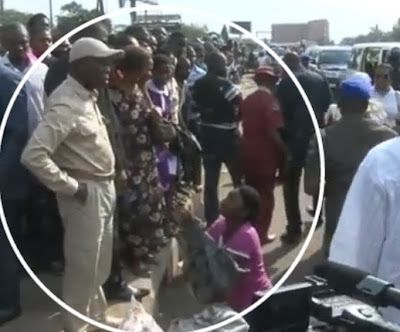 Days after a cruel statement made by Edo State Governor Adams in Benin city to a crying widow, notable figures from all over the country have started blaming him.

In a video currently going viral on the net, the governor was spotted venting angrily on a poor widow who broke environmental sanitation law by hawking illegally on the street.

Instead of him to allow law enforcement officials to carry out their duties, Governor Adams took it upon himself to unleash anger on the woman by saying “You are a widow, go and die.

Hear what Bianca Johnson and Femi Fani Kayode said about the case:

“Such heartlessness – Oshiomhole tells this penniless widow that is begging him to “go and die”. What is it that makes some men behave in such a cruel way to others once they get power? I am utterly speechless” – Femi Fani Kayode

“I lost every pint of respect for Gov Oshiomhole after watching this video. Please inbox if you have any information about this lady. I need to know her. Thanx!
For those in Nigeria, please help me find this woman. She is a widow and must not die. She will live to declare the goodness of God in her life and that of her children. Gov Oshiomhole words will return void.

Remember the story of the woman with the issue of blood, God exonerated her and she became part of biblical history” – said Bianka Johnson

There is no amount of apology that can take away this stigma from the popular Governor of Edo State.