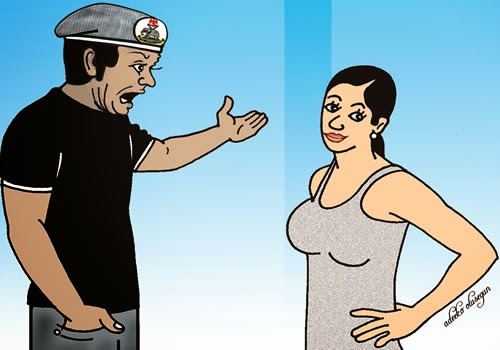 March 11, 2015 – Woman Divorces Husband Over His Refusal To Pay Her Dowry, Bride Price

There was drama at Customary Court sitting in Ejigbo, Lagos State, western Nigeria, where a housewife, Mrs Funke Oludotu dragged her husband, Omodayo, seeking for the dissolution of their marriage because her husband refused to pay her bride price.

But in his response, her husband said her parents gave her out in marriage free of charge and there was no need to pay her bride price, saying she already had children for him.
The argument between the husband and wife caused laughter among those present at the court during the trial.

Funke told the court that she left her parents’ house to Omodayo’s house and they started living together as husband and wife which produced two kids.
She said instead of her husband to formalise the marriage by paying her dowry, he pleaded with her and deceived her to have another pregnancy.

She said she had to leave Omodayo’s home at Karimu Taiwo Street in Itire, Lagos.
She also instituted a suit seeking for the dissolution of their 8-year marriage on ground that she was not treated as his genuine wife.

Funke told the court that apart from that, he was cruel to her and her two kids and does not respect her parents.
The woman said despite the fact that her husband did not pay any bride price, he beats her regularly in the presence of her parents.

“He claimed that I am his wife but he did not pay a dime as my dowry and still wanted me to obey him always,” she said.
Funke asked the court to dissolve the marriage so that she could move on with her life and Omodayo should take care of the children.

He said the marriage was blessed with two children and he was taking care of his family before Funke left his house.

Omodayo told the court that since she said that she was no longer interested in the marriage, she should go away.

The President of the court, Mr A.K. Akano adjourned the matter for continuation of trial.