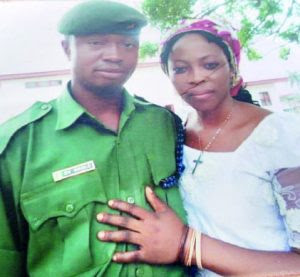 December 23, 2017 – Wife Of Nigerian Soldiers Who Died While Fighting Boko Haram Cries Out As Military Threatens To Evict Family

Not all victims of Boko Haram are to be found in insurgent-ravaged communities of the southeast. Many sad tales echo from military barracks across Nigeria, from secondary victims of the Boko Haram insurgency, women and children whose husbands and fathers are soldiers that died or went missing while fighting the insurgents in the dangerous and high-mortality badlands of the northeast.

Occasionally one hears an earful of simmering lamentations of soldiers’ wives emanating from barracks. Pathetic stories of women, who not only lose their husbands and family breadwinners but whose marriages had been upended and unbalanced by their husbands’ long absence from hearth and homes, stories of women who are left out in the cold by the brutally impersonal manner the army relate with families of missing or deceased soldiers.

Janet Okolo is one of the many women who faced all the three dimensions of this ‘soldier’s wife’ tribulation.

For the 30-year-old wife, it is exactly two years since she last heard from her husband who was posted in 2014 to Maiduguri, the main theatre of the Boko Haram war.

“I want to see my husband dead or alive, without him life means nothing to me” is the sad refrain the hapless mother of three sings to any sympathetic ear.

Narrating her ordeal to Saturday Sun, she gives a succinct introduction: “I am from Imo State but married to Ezeajigbo Okolo from Agwu Local Government Area of Enugu State. I am 30 years old. I got married on June 25, 2005. The marriage is blessed with three kids––two boys and one girl. We relocated to Calabar in 2011from Ibadan. My husband joined the army in 2002 as a lance corporal. Since then, he has been posted around from one official duty to another, including an international assignment and it was since he came back from Sudan in 2013 that our suffering really began.”

According to her, the couple hardly lived together for any considerable length of time as husband and wife. To worsen their situation, in November 2014, her husband, despite his liver problem, was posted to Maiduguri to fight Boko Haram.

“From Maiduguri, somebody called that he was once hospitalised after he fell down. He ran away when Boko Haram attacked his company because, according to him, they had neither bulletproof vests nor crash helmets to fight. He came back to Calabar to receive treatment.”

Okolo returned to Maiduguri after three months to meet a load of trouble waiting for him. Charged for going AWOL, for abandoning his duty post without permission, he was locked up in a guardroom for one-and-half months.

“Even after serving his guardroom term, his new commanding officer refused to accept him, claiming he did not belong to the command. After much persuasion, the officer requested for a medical report to back his claim of being ill. My husband called me about it, and I sent the document to him. They refused to accept it. The focus was shifted to his travel to Calabar without the right approval.”

Okolo was ordered back to Calabar––without the requisite board pass. In Calabar, he was, again, locked up, this time, for three months, from March to May 2015.

“After that, they sent him back to Maiduguri, for the third time, and at first insisted, again, that he could not join the battalion because of his failure to obtain permission before travelling to Calabar. It took a lot of arguments to finally let him be.”

Troubles for his family

In the meantime, his family in Calabar was facing a different ordeal.

In the thick of this tribulation, Okolo’s ATM card expired and in December 2015, his wife went to the Brigade Command at Calabar so she could be assisted to renew the card to enable her to withdraw money from his account to feed the family.

“Around that period, he called and told me to pray for him because they were punishing him too much. I did pray for him that God who took him to the war front will bring him back safely.”

That was the last she heard from him.

“I reported to the office, about not hearing any news of him. I got no reply. Shortly after that, they issued me a Missing-In-Action-letter. In the letter, they wrote “Late Lance Corporal Okolo.” I queried the use of the word ‘late’. The letter was retrieved. They told me it was a mistake.”

In September 2017, the inevitable happened. An officer from 13 Brigade Calabar visited the family at Eburutu Barracks and gave Janet Okolo a form to fill that officially declared her husband missing.

The distraught soldier’s wife refused to accept that reality. She insists: “I want to see my husband dead or alive. He cannot just be buried like a fowl if at all he is dead. I want to see his corpse. I am passing through hell and my children––aged 13, eight and seven––are asking me every day about their father.”

“The Army told me my husband is missing. I beg them to help me locate him. My spirit tells me my husband is not dead. Perhaps, he and others may have been kidnapped by Boko Haram. Many times, we have had cases of some soldiers declared missing in this same Calabar, but they later resurfaced. I know about two women who passed through this ordeal. One of them, after five years, her husband came back from the same Boko Haram enclave. They later had Thanksgiving for the man. So, they should go and find their colleagues and be sure they are dead before declaring them missing.”

For a brief moment, she relapses into a fit of hysteria. “My husband has not known rest since he joined the army. He has suffered and moved from one point to the other. Sometimes I would cook and carry it to Eket when he was posted there for an official assignment. I can tell you that there is no paper or evidence to show that my husband is dead for over one year.”

Her next statement depicts the dark underbelly of being the wife of an unfortunate soldier. “They owe us from May 2013 to December 2014. They have not paid us. Nobody is helping us to get the money. I saw him last in June 2015. Some soldiers have not been seen for months, yet nobody disturbs their wives. Why should my own be an exception?” she cries.

Janet Okolo ends the interview with a poignant plea to the public. “They are threatening to issue a notice to block the salary account of Okolo, since they have not seen him for over a year now, in line with their tradition. I was summoned in September to 13 Brigade Garrison, Oga’s office and was handed a letter of their intention to stop further salary payment. I plead that they should not stop payment of my husband’s salary. Nigerians should please come to my aid.”