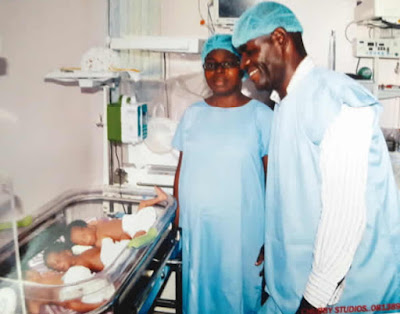 Grace Soje, the wife of late Edward Soje, Kogi State civil servant, who committed suicide on October 16, 2017 is still in shock over the death of her husband.

The widow told Sunday Punch that her husband showed no signs of depression the last time she saw him alive.

Mrs Soje who is still in a private hospital in Abuja told Punch she wasn’t informed of her husband’s death until October 31st.

Still struggling to come to terms with reality, the widow said;

“I learnt of my husband’s death on Tuesday. I was not even informed because my phone was taken away from me after I gave birth. But on that particular day, I saw my phone lying around and it was switched off.

“So, I turned it on and saw my brother-in-law’s text message in which he said he had gone to pick up his dead brother’s corpse. It was at that point that I started screaming that they have killed my husband.”

Grace told our correspondent that she saw her husband alive on October 14, during the naming ceremony (christening) of their triplets– Elijah, Elisha and Enoch. 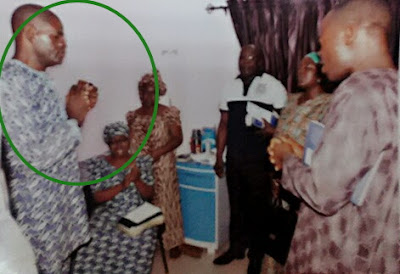 She explained that she was the one who asked him to go home to rest and put things in order and then come back to the hospital.

“We did the naming ceremony at the hospital on October 14 and there was no quarrel whatsoever. We only asked him to go home and rest because the hospital was filled up and the nurses were driving people away.

“So, I told him to go home to rest and return in the evening so that we could plan how to move our car and some other things from Kogi. That was the last time I saw him.

“On Sunday, we waited for him to come but we never saw him and his phone was switched off. So, my cousin, who was staying with me, went to the house but didn’t tell me anything but she told my elder sister what she saw in the house such as the cardboard where he left a message.

“He said God would preserve me and that I should take care of the boys. It was on Monday that my elder sister called me to ask if I saw what was in the house but nobody was explaining anything to me.”

“One of the nurses told me that when I was in the theatre and the babies were born, my husband was rolling on the floor, praising God. He bought banana for the nurses. Even my tenants in Lokoja said on Friday, my husband was very joyful and told them that he was going to stay in Abuja for a long time to take care of his children.

“We never quarrelled. In fact, my blood pressure was high and he was the one who calmed me down and asked me to rest and keep my phone aside.

“He never gave me any sign of anything; nothing! On Tuesday, his nephew, who lives with us and happens to be a civil defence official, called me, saying that my husband came to his house and was saying some things that he didn’t understand.

“He said my husband was complaining that he didn’t own any property and that all the properties belonged to me. So, I asked him, when my husband was saying all these things, why didn’t he take him to relatives’ house or lock him somewhere?”

“I don’t know if he committed suicide because of salary because I am not a Kogi State civil servant. After all, he has not been collecting salary since January but we have been managing my own salary. So, I don’t know.”

“Nigerians should assist me so that I can take good care of the children. We have not been able to settle the hospital bill. We have been given a bill of N1, 627,000 by the hospital but one of the triplets had to be taken to the National Hospital for a surgery and I don’t know how much his own bill is right now.”