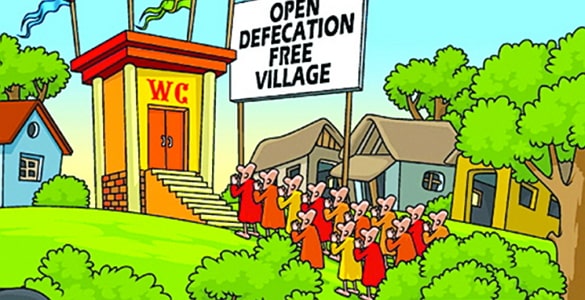 Many articles have been written in the local newspapers and other outlets on the subject of toilet facilities and disease outbreaks in Nigeria. More would still be published so long as this issue, despite its centrality to healthy life and living, is yet to be rigorously attended to by governments at the local, state and federal levels. Suffice it to say, that a healthy society is critical to an efficient labour force for local industrialisation and by extension, economic development. Therefore, faecal waste management which is embedded in culture must be handled with great care anchored to public health awareness in diverse ways. Culture is transformational in character, understandably because man’s social and material environmental conditions as well as sensitivities are not a fixity.

The popular but unhealthy open defecation culture in Nigeria has its long, firm roots in considerable antiquity. Use of the surrounding bush, rivers, streams, and ponds as toilets were/are a socially acceptable practice among most citizens. Our urban settlements appear to be worse in this connection. Human faeces litter roadsides, flyovers and other locations in Nigerian cities. Even Abuja, despite its federal capital status, is not a complete exception. Numerous houses and business centres have no lavatories and/or urinals. This primordial toilet culture robs Nigeria of its corporate dignity. Therefore, the country must be quickly rescued from the swamp of filthiness into which it has been sinking fast. We cannot afford to spin out of total control. Toilet facilities remain an alien concept to most landlords and land ladies even as they pollute every neighbourhood with shops. Proper hand washing and food hygiene practices are laughable trivialities largely because such things do not occupy a key position in the people’s vocabularies of popular essence.

Sometimes, traders especially those selling foodstuffs in the market neatly wrap their faeces in polythene bags and dispose of them in front of their shops in the evening before closing for the day. Well-dressed ladies and men buy foodstuffs in these filthy markets with obvious relish. Both the people and governments do not care a hoot about the health implications of this behaviour. According to the report by the United Nations Children Fund (UNICEF) about 59,000 children die annually in Nigeria from water-borne diseases such as cholera, typhoid, hepatitis, ascariasis and schistosomiasis. In addition, at least 120 million Nigerians are at the risk of contracting guinea-worms and infectious hepatitis among others, due to a general lack of access to drinkable water.

Again, the European Union (EU) and UNICEF claim that two out of three residents of Ekiti State are still engaging in open defecation. It is a pity that about 1.8 million out of 2.7 million people of the state continue to use local streams and the surrounding bush as toilets. The above two bodies promised recently to construct some public toilets for two local government council areas in the state – Gbonyin and Ekiti-West. Such public toilets would be located in motor parks and market places. Nigerians should not completely surrender their destinies to these international bodies that may soon begin to experience donor fatigue. This is a Nigerian problem that must be tackled largely from within.

Many public tertiary institutions are equally in a mess in this regard. According to Kingsley Jeremiah in The Guardian newspaper edition of April 13, the Kogi State University’s Inikpi hostel was in a sorry state. In this hostel, 26 students were/are using one toilet, thus leading to several cases of infection especially among the females. Please visit other public university toilets in Nigeria before you start castigating the management of the Kogi State University. In most public universities, ladies use potties as a coping strategy while the male students leisurely engage the bush in the 21st century. What a crying shame! It is a pan-Nigerian challenge that should worry all of us! Although open defecation still goes on in India and a few other parts of the globe, the Nigerian government should not breathe a sigh of relief because of this. We must emulate the advanced nations and develop a multi-scalar understanding of this critical subject. Nigeria has to draw from the West for fundamental innovations in toilet culture including other elements of material technology on a sustainable scale.

The Nigerian government has to show the willpower and allocate at least five percent of the country’s GNP to health including provision of public toilets. The World Health Organisation (WHO) recommends that every country should spend at least five percent of its GNP on health. Painfully, Nigeria is spending between 1.5 and four percent only. On the other hand, most advanced nations spend at least 10 percent of their GNP on public health. There is need for networking with relevant ministries and agencies in order to have a success story. In this regard, the ministries of health, water resources, housing, and education must begin to dance together. Self-seeking and corruption should not be given a place to stand in the scheme of things.

Apart from providing toilets and urinals, there must be a strong piece of legislation on the use and management of these facilities from the perspective of maintenance and sustainability. Anybody who falls foul of this legal arrangement must be sanctioned accordingly. Toilet managers must also have supervisors for optimal efficiency. User charges may have to be paid to ensure good maintenance of these toilets at all times, in line with the best global practices. Modifying or changing a people’s cultural orientation needs a great deal of sophisticated social engineering enshrined in sociology, anthropology and psychology. Consequently, the government has a long, fierce battle to fight against monumental ignorance including primordial fear of bewitchment that afflicts many citizens like a plague.

Whenever rains carry human faeces from the bush into rivers, streams and ponds from where water is fetched for drinking and washing dresses, then the people are directly introducing all kinds of germs into their bodies. This is a desideratum for diseases-one main index of underdevelopment in Nigeria. Therefore, witches –real or imaginary are not to blame. We should leave witches out of this. Those defecating in open spaces including water bodies are the witches or wizards that must be tamed at all costs through appropriate health education especially regular public awareness campaigns. This is in addition, to the government that does not show sufficient commitment to the issue of public health as a baseline for improving the human condition.

Professor Ogundele writes from Dept. of Archaeology and Anthropology, University of Ibadan.