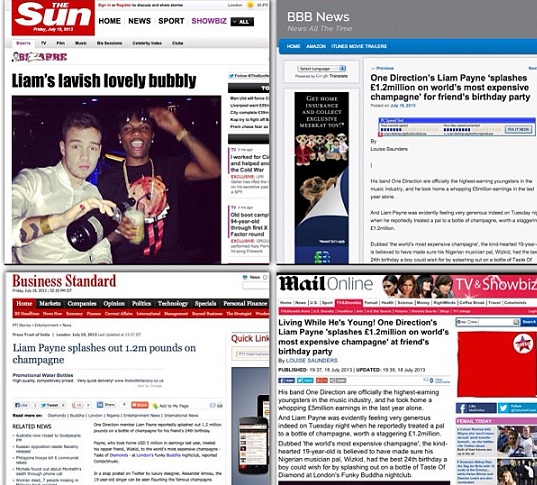 This week, the star boy got splashed in London with the diamond version of Alexander Amosu‘s world most expensive champagne by Liam Payne.

While people thought the champagne bottle used was that of Amosu’s £1.2m, we learnt the version Liam splashed on Wizzy is the £350 Swarovski diamond edition.

The owner of Stayboy entertainment consumed a full page of the int’l tabloid this week.

In another development, Alexander Amosu claims the champagne bottle pictured on the international newspaper is the diamond edition.

“Wow!!! seems the media has taking my instagram & changed it to there own. swarovski diamond edition as stated in my Instagram is £350 and not £1.2m”

Here is how Mailonline reported the story;

His band One Direction are officially the highest-earning youngsters in the music industry, and he took home a whopping £5million earnings in the last year alone. And Liam Payne was evidently feeling very generous indeed on Tuesday night when he reportedly treated a pal to a bottle of champagne, worth a staggering £1.2million.

Dubbed ‘the world’s most expensive champagne’, the kind-hearted 19-year-old is believed to have made sure his Nigerian musician pal, Wizkid, had the best 24th birthday a boy could wish for by splashing out on a bottle of Taste Of Diamond at London’s Funky Buddha nightclub

This is a confirmation that the version Amosu sent to Don Jazzy and Peter Okoye is the cheaper (£350) one.

On the home front, critics are saying this is a confirmation that Wizkid is a member of the Illuminati secret cult.

Lip sealed…. make them no say nah me talk am o.

Asari Dokubo Defends Under Age Marriage Law In Nigeria “We Muslims Can Marry Girls Of Any Age”
Funke Akindele’s Separation, Marriage Crash Confirmed “She Has Left Her Husband” – Publicist