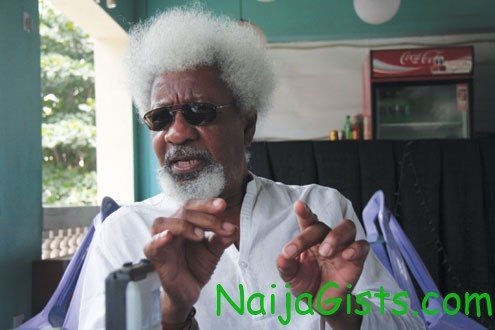 May 12, 2012 – Wole Soyinka On Fuel Subsidy Probe: We Are Being Dehumanised

Below is Prof. Wole Soyinka‘s comment on the ongoing Fuel Subsidy Probe in Nigeria.

All I can I say is that we have been overwhelmed into insensitivity by sheer excess. I have studied very carefully those figures and I have had to take a couple of aspirins after every paragraph, after every figure to ask and pinch myself; are we really living in the real world? Or whether this is some kind of fantasy world which is projected onto the pages of newspapers.

These are not figures plucked out in thin air. We have listened very carefully, the sources of these figures have been cited, the reaction of House of Representatives have been noted; but we have not heard any of these figures disputed by the relevant instruments of government.

One can no longer use the words like disdain and contempt, we have moved beyond that. We are being treated, not even like first or second class or third class citizens, when we are brushed in this way, we are being dehumanized.

It goes beyond just insults from arrogance of people who believe that they can get away with murder. Just as we thought we had recovered from the pension scam, along came a humongous, material assault on the resources of the ordinary people. All that I will ask is a specific plea that the populace should be ready for another determined march on corruption.”

The hearings  have been held, but I think that future hearings should actually be held in public. It should be televised live. We are not talking about any kangaroo trial, or trial by media. No, we are just looking for an open examination of what is going on. I think we shouldn’t agree to leave further hearings just only to the chambers of the legislature. I think these hearings should take place in public. We should hear those who are involved directly, attempt to exonerate themselves and give an explanation for rational, ordinary people to speak for themselves.”

The relevant anti-graft agencies should prosecute those found culpable in the subsidy scam. I think there is enough prima facie case by the EFCC and ICPC and all other investigative and prosecuting bodies to move. In all these situations, we have all been obviously ridiculed to the the whole wide world. We have heard the comments of the international monitoring community and what we who travel have to undergo from commentaries against our nation, against our governance. The humiliation is just too excessive and I think it’s wrong that some of us have to bear this brunt of criminality and lack of conscience of other people.

So my demands are two things and they are very simple. Further hearings should be in public and should be televised. Secondly, the anti-corruption bodies specifically set up, are already overwhelmed, but we should not wait until the burden is taken off our shoulders by external courts.  Nigerians must be prepared to march, they must be prepared to come out en-masse and demand a termination to this career of insolence against the ordinary people. These monies being stolen is intended for the people of Nigeria for genuine requirements.

It is clear that the crisis in the oil industry is not about subsidy but corruption. The whole subsidy thing has extended the  epidemic of corruption and this corruption has led to looting our treasury empty. We also know the adverse effect of corruption. For instance, we have maternal mortality, extreme hunger and poverty.

We have had our roads leading to the mortuary, terrorism and all sorts. We can no longer condone this. It is time for us to wage war against this epidemic. We are demanding the prosecution of those indicted. It is said that no one is above the law but there must be political will on the part of the government to prosecute all those who have been found wanting. Those who have contributed in all these in terms of not seeking appropriation before spending should be penalised and be made to give account.

This is the time in our lives when we have to say enough is enough and that is what we demonstrated when we held the subsidy protest. It is the culture of impunity that has been there for a long time. Nigerians should organise themselves and at the appropriate time, we are going out in unity to march against corruption. Nigerians should know that these resources belong to them and it is not meant for the government. Therefore, it is expected that this thing shouldn’t be allowed.

Petroleum subsidy revealed an organised banditry which, in the words of the Lawan Farouk Committee, “can hardly be rivaled in the history of a warped budget management of any nation anywhere in the world”, reinforced our position in January that the crisis in the oil industry in Nigeria is not about subsidy but corruption.

The Committee said the following, and we fully agree: “We found out that the subsidy regime as operated between the period under review (2009 and 2011) were fraught with endemic corruption and entrenched inefficiency. Much of the amount claimed to have been paid as subsidy was actually not for consumed PMS. Government officials made nonsense of the PSF guidelines due mainly to sleaze and, in some other cases, incompetence. It is therefore apparent that the insistence by top government officials that the subsidy figures were for products consumed was a clear attempt to mislead the Nigerian people”.

When the pension scam broke out, the three specialists working on Nigeria complained about overwork and threatened a law suit against Transparency International because they had to work 23 hours a day from Monday to Sunday just to cope with the figures coming out of that scam.  Our client had to pull country specialists away from zero or low corruption countries such as New Zealand, Denmark, Finland, Sweden, Singapore, Norway, Netherlands, Australia, Switzerland, and Canada.

The specialists working on all these countries were transferred to the Nigerian Desk. Now is the time to act to save our country from the grip of corruption. To this end, we are giving two weeks to see concrete steps in the direction of prosecuting the indicted officials ,failing which we shall be calling our people out on protest.