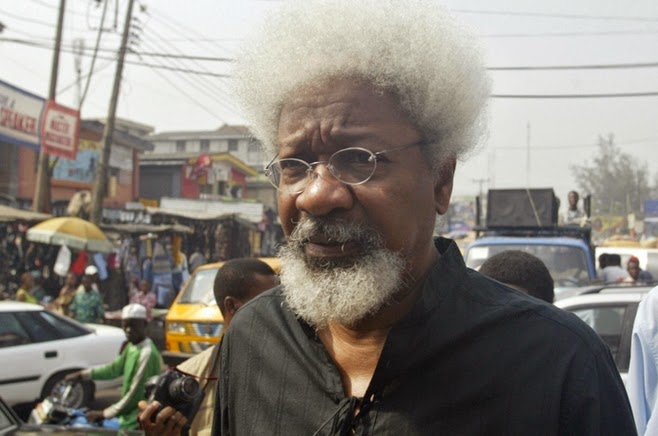 In a chat with The Guardian UK on Sunday the 29th of March 2015, Nobel Laurate, Professor Wole Soyinka talked about his recent meeting with President Goodluck Jonathan and what they discussed.

On the ongoing election:

“We’re talking about a very positive response by the public in terms of determination to register and vote but, you know, this has been one of the most vicious, unprincipled, vulgar and violent exercises I have ever witnessed.

“I just hope we won’t go down as being the incorrigible giant of Africa.”

“This one was like a no-holds-barred kind of election, especially, frankly, from the incumbency side. One shouldn’t be too surprised anyway given the kind of people who are manning the barricades for the incumbent candidate.

On the lavish election campaign and Nollywood endorsement, Soyinka said:

“Most expensive, most prodigal, wasteful, senseless, I mean really insensitive in terms of what people live on in this country.

“This was the real naira-dollar extravaganza, spent on just subverting, shall we say, the natural choices of people. Just money instead of argument, instead of position statements.

“And of course the sponsoring of violence in various places, in addition to this festive atmosphere in which every corner, every pillar, every electric pole is adorned with one candidate or the other, many of them in poses which remind one of Nollywood.”

Prof Soyinka told The Guardian UK that GEJ recently invited him to Aso Rock to discuss various issues  and life after power.

“It was difficult for me to decide from his side how readily he might accept defeat. He absolutely swore that if he lost he was going back to Otuoke village. If I take him literally, I think he will accept the result, but I’ve learned never to trust any politician from here to there, even if they’re just coming out of communion. So I really don’t know.

“I think Nigerians have had a very rough time over the last few years with Boko Haram and all kinds of insecurity, failure of governance and so on. I think we deserve to have this period as a period of comparative tranquillity and peace of mind to reconstruct and address some really fundamental issues of society. So I really hope the result, however gracelessly or grudgingly, will be accepted by the loser.”

Continue Reading
You may also like...
Related Topics:jonathan, Meeting, Soyinka