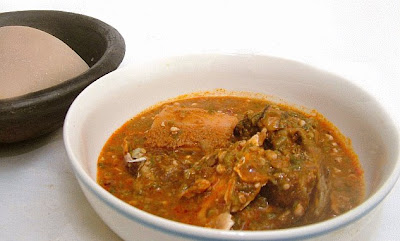 Calamity struck the community of Umueze, Egbelu Nguru, in Ngor Okpala Local Government Area of Imo State yesterday, when a middle widow, Mrs. Gladys Nwosu and her three daughters died after a meal of okro soup and eba. Also, the deceased’s two daughters, who also ate the food, are now lying ill at the Ngor Okpala General Hospital.

Saturday  Sun gathered that  the late Mrs. Nwosu and her five children woke up yesterday morning and started their daily chores, when suddenly the children complained of stomach ache.  Sources said that the late Mrs. Nwosu had rushed the children, who were already writhing in pain to the Cherubim and Seraphim Church, fearing that they may be under demonic attack.

When their condition deteriorated, they were rushed to the Ngor Okpala General Hospital, where they were confirmed dead. Hours later, it was gathered, the deceased widow began to shout that her stomach was on fire and was rushed to the same hospital by neighbours. She also died at the hospital. It was gathered that the deceased children are Chinelo Nwosu, a 23-year-old final year student of the University of Nigeria, Nsukka; Amaka Nwosu, a primary school pupil and Ijeoma Nwosu, who just finished secondary education.

The two other children now on admission at Umuneke General Hospital, are Njideka Nwosu (18) and Chidera Nwosu (20).  Mr. Patrick Okere,  a kinsman  of the deceased, who expressed deep shock  over the tragedy, confirmed that the deceased initially took the children to her church for prayers, thinking that it was a demonic attack.

He stated that while at the church, the situation got worse and the children were taken to the general hospital where they were confirmed dead of food poisoning by the medical doctor. Meanwhile, when Saturday Sun visited, the compound of the deceased was deserted.