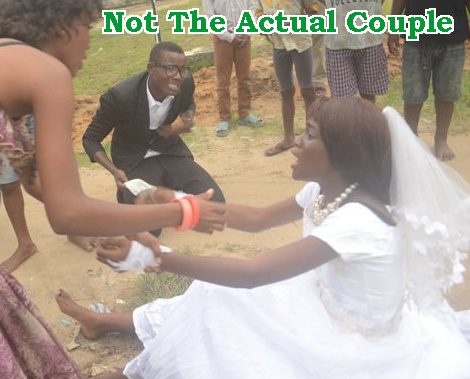 Nov 2nd, 2016 – The True Story Of The Lady Who Abandoned Her Husband On Wedding Day In Delta State

Last week, the story of a bride who ran out of her wedding reception venue surfaced on the net with some dramatic photos taken from the set of an upcoming movie.

The truth story is out and it is not connected to the photos that initially went viral.

The name of lady who abandoned her husband on their wedding day last Saturday, the 29th of October 2016 is Roseline.

According to the groom, 41-year-old Julius (last name withheld by request), 32-year-old Roseline had a lover before he met her.

The man who had promised to marry her suddenly abandoned her in Delta state and left for lagos.

After waiting for so long without hearing from him, Roseline moved on with Julius.

Sadly, the man showed up at her wedding reception in Delta state.

On sighting him at her wedding reception, Roseline suddenly shouted “I am no longer interested” and fled the reception venue with the hope of later reconciling with her former lover.

Sadly, the man in question has married and Roseline out of shame moved out of Delta State to Cross River.

Julius said all effort to find his wife has failed since he learnt she has relocated to Calabar in Cross River State.

This will make a good story line for a Nollywood movie. (Proposed title: The Wedding Crasher Part 1)