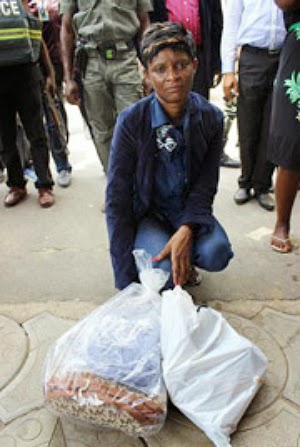 A business woman, Ifeoma Willams Iheanacho, from Mbieri in Imo state, southeast Nigeria, has been arrested by the police in Rivers State for allegedly stealing goods valued at N2,079,000 from Zara Boutique, Port Harcourt.

CP Tunde Ogunsakin, the Commissioner of Police, Rivers State Command, in a statement said that the incident occurred when the suspect visited Zara Boutique at No. 4 Mbonu street, D Line, Port Harcourt and met the sales girl, Kemaegbeye Rachael, who told her that her boss had gone out.

The suspect allegedly collected the phone number of the owner of the shop, Mrs. Oroma Amadi from the sales girl and left.

When Mrs Oroma Amadi returned to her shop, the sales girl informed her about the transaction but she denied authorizing anybody to collect any item in her shop and she reported the matter to the police.

Ogunsakin said after the suspect collected the items, she fled Port Harcourt to No. 21b Park View Estate, Ikoyi, with the stolen items. He further said following a report by the complainant, he dispatched his men to track the suspect down and she was arrested in Lagos with the stolen items and taken back to the Rivers State Police Command, Port Harcourt, where she is currently undergoing interrogation.

Ogunsakin said the suspect will be charged to court after investigation.