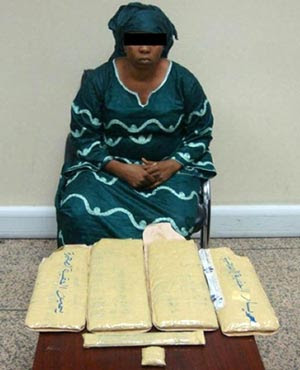 A Lagos businesswoman, Imonle Funke, has been arraigned before a federal high court in Lagos on a one-count criminal charge of importation of drugs into Nigeria.

According to the said criminal charge filed before a federal high court in Lagos, southwest Nigeria, by the NDLEA prosecuting counsel, Mrs. F.N. Ajagu, the accused Imonle Funke on 15 April, 2012 was alleged to have imported into the country 25 kilogrammes of cannabis sativa(Indian hemp).

Mr. Ajagun alleged further that the cannabis sativa was concealed in the luggage of the accused woman and was discovered when the luggage was searched.

The offence allegedly committed by the accused is contrary to and punishable under section 14 (b) of the NDLEA law cap 30 law of the federation, 2004.

The accused pleaded not guilty and was consequently granted bail in the sum of N500,000 with one surety who must swear to an affidavit of means while the case was adjourned till 18 September, 2012 for trial.