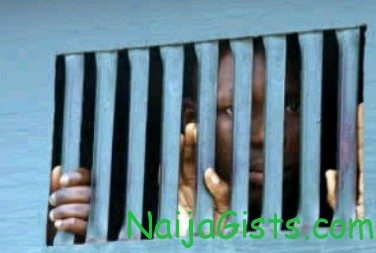 Mr Joseph John, a lecturer at Yabatech‘s Business Admininistration Department has been arrested for allegedly beating a 12-year-old boy put in his care, a child abuse case. naijagists.com

Prof Joseph John who resides at # 7 Osanyinpeju st in Akoka area of Lagos was arrested on the 6th of November by the Lagos State Police command in conjunction with WAPA (Ministry of Women Affairs and Poverty Alleviation).

The 12-year-old victim was barred from attending school since March of this year over what he termed rude behaviour.

The victim painted a gory tale of how he was being allegedly maltreated by John’s family and he drew the sympathy of all.

Officials of the WAPA ministry claimed that people living the John’s neighbourhood were overjoyed when the boy was rescued and the alleged culprit arrested. There were wounds on the boy’s body, one close to the eyes, another on his buttocks, several marks of beating and swollen hands occasioned by severe maltreatment.

According to the victim, who hails from Imo State, “I started living with the man in January and they put me in school, Primary 4 but they stopped me from going to school in March. They said I gave my father’s number to my teacher to call.

“The man will not give me food but he will give his son food, so whenever he gives his son food, I will eat from it and this will attract beating. He beats me with electric cable, plank and curtain rod.”

He alleged that “he will tie my hands from the back and tie my legs. Anywhere he inflicts injury on me, he will apply pepper to that spot.

“Whenever he keeps food, I will eat it because he did not give me food. I normally go outside to beg for food and he beats me when he knows about it. At times he will use blow on me.”

He further alleged that he was being accused of eating from the food he was asked to give to the dog, saying that “he will ask me to bring plank and hit it on my buttocks and I will feel serious pains.”

However, John admitted that he beat him whenever he did something wrong, saying that the aim was to correct his bad behaviour.

“This boy is my uncle’s child and I brought him to Lagos. The one who seniors him has impregnated a girl. I was asked to train him.

“I put him in school and in that school, I receive report that he is not participating. I asked him for his book and it was blank and I flogged him. After sometime, I discovered that he had started stealing, he will break the door and empty my money and he says because he is hungry.

“We saw money in his bag and it is only God who can judge between him and me. I even took him to Mountain of Fire Ministry so that his life can change but he will go there to sleep,” he explained.

He denied using planks and electric cable to beat him, but noted that he had exceeded the limit in beating, saying that he would send the boy back to his parents.

Permanent Secretary, WAPA, Risikat Akiyode lamented the serious injuries inflicted on the boy’s body, adding that the Child Rights Law forbade inflicting wounds on a child. “You can beat a child but not to inflict injury on him. The law will take its course,” she stated.

As at the time of filing this report, John had been taken to the Alausa Police Station for further investigation while the victim was taken to one of the state’s rehabilitation homes.(PM reports)