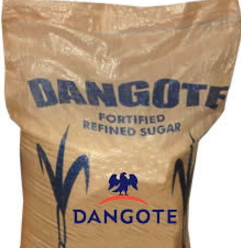 A businesswoman identified as Esther Akinsanya has been arrested after she was caught repacking imported sugar from Brazil into Dangote Sugars bags.

The suspect and her worker, Femi Adebiyi were caught in a shop located at 1 Tailor road in Iddo area of Lagos on Wednesday August 2nd, 2017.

The National Agency for Food and Drugs Administration Control has prepared a 4-count charge against the two suspects.