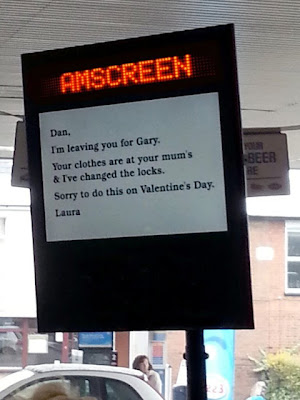 On Thursday February 14, 2013, a funny woman publicly dumped her boyfriend via a billboard advert.

This hilarious billboard ad was placed at an Esho petrol station in Manchester on Thursday for everybody to see.

The woman identified as Laura placed the bizarre ad on Valentine’s day for her boyfriend, Dan and others to see.

“Dan, I’m Leaving You For Garry. Your clothes are at your mum’s & I’ve changed the locks,” the advert read.”Sorry to do this on Valentine’s Day.”

The billboard costs approximately £100 per month.

According to the Sun, Laura intentionally placed the ad there because it is Dan’s favourite Lunch spot.