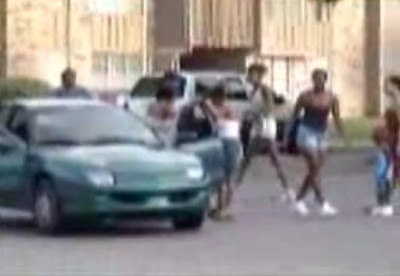 July 24, 2012 – Woman Engages In Street Fight With Professor Over Rent

A woman identified as Sandra Aihanunwa has been arrested for allegedly engaging in a violent street fight with a Professor Akin Adeonojobi in his Egbe, Lagos home.

According to pm report,Mr Akin who is a professor of Philosophy at Federal University, Lafia got into a brawl with Sandra who rented his shop located in front of his house at James Omotosho street, Egbe Lagos after asking for his rent.

42-year old Sandra became violent and grabbed him, tore his cloth and damaged his eye glasses.

The matter was reported at Ikotun police station and she was arrested and charged to court for assault.

Narrating what happened in the open court, the professor said that he rented one of the shops in front of his house to Sandra and that her initial payment, she had refused to pay her two years rent arrears.

He said that he dragged her to court to recover her property from her.

He said that she also constituted a stumbling block to other shop owners who complained to him to intervene to forestall break down of law and other. He said it was while he was advising her on the report by co-shop owners that she assaulted him. When the charge was read to her, she initially pleaded not guilty.

At the court Sandra wept and pleaded and begged the professor for forgiveness.

This moved the professor and the presiding Magistrate, Mrs. M. B. Folami, who pleaded with the professor to consider forgiving her.

The professor told the court that since she had shown remorse, he had forgiven her and asked the court to strike out the matter.

The court subsequently struck out the case and referred the matter to Community Service Non Custodial Sentence, a new organization created by the judiciary for counselling and reconciliation.