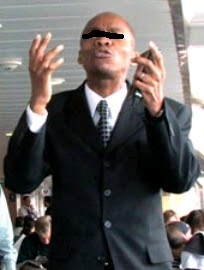 A 38-yr old Evangelist identified as Obiora Okoye has been arrested for duping his church members of N1.6 million which he obtained under false pretence In Ogun State,Nigeria.

Evangelist Okoye who resides at no 3 Faith Estate, Toll-Gate Sango was arraigned at Oshodi court on 1-count charge of fraud.

He allegedly took N1.5 Million from One Chika Okoli with a promise he will secure British Visa and tickets for him and his wife.

He additionally obtained N103,000 from another church member identified as Ezonyeamu with a promise he will help his brother, Michael Ezeifem adopt a child from motherless baby’s home.

“Okoye organised prayer sessions and had been praying for Ezonyeamu’s brother, who had been married for two-years without a child.

“He promised to help them adopt a child from a motherless baby’s home, which he never did.”