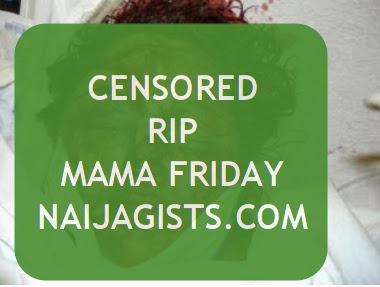 Yesterday, 4 young boys allegedly stormed the house of a popular pap seller in Oniyanrin area of Abeokuta, the capital city of Ogun state.

During the attack, the 50-year-old mother of 5 was gang raped and murdered.

A witness who spoke to journalists said the rapists entered the woman’s house through the window.

Area residents said the 50-year-old woman from Benin popularly called Mama Friday lived alone in the boys quarters of the main building as her hubby, a bricklayer worked in the town of Ifo.

A source, who preferred his name not to be disclosed, narrated that the gang having gained access into the apartment, engaged the victim in a marathon sex, and after satisfying their sexual urge reportedly slaughtered her and fled the scene.

Meanwhile the victim’s neighbours were said to be unaware of what was happening happening until until the woman’s lifeless body was found on the bed, with bloodstain and pants at the edge of the bed the following morning.

As we speaks, the 4 suspects who allegedly raped her have been arrested by Ogun Police Command as investigation continues.