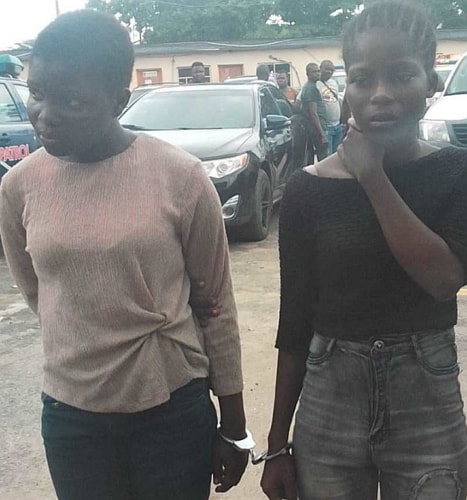 A young girl identified as Dorcas Adinlewa has been arrested for plotting her own kidnap in a bid to get money from her father.

The 19-year-old connived with her friend, Ifeoluwa Ogunbanjo who provided location and a phone to contact her parents.

The Lagos State Commissioner of Police, Mr Imohimi Edgal, said that the suspects were arrested on July 13 following a report by the suspect’s father at Ketu Police Station.

He was told that his daughter, Dorcas Adilewa, was being held hostage and that if he does not want her killed, he should pay a ransom of N600,000 to secure her release.

“Investigation into the case was immediately commenced and the above phone number that was used by the suspects was geo-located to Ijebu-Igbo area of Ogun State.“

“When the fake kidnappers realised that the Police were closing in on them, the supposed victim decided to call the complainant to inform him that she has been released, after he had deposited the sum of N8,000 naira in her UBA account number: 2087804991.”

Imohimi said that when Adilewa was being debriefed upon her release, she confessed that she actually planned the fake kidnap with her friend, one Ogunbanjo.

“She provided her with accommodation at No. 174, Adeboye road, Okesopin, Ijebu Igbo in Ogun State to hide and the phone that they used in demanding for the ransom.“Investigation is in progress and on completion, the suspects will be charged to court accordingly,” the commissioner said.

Continue Reading
You may also like...
Related Topics:girl, kidnap, lagos