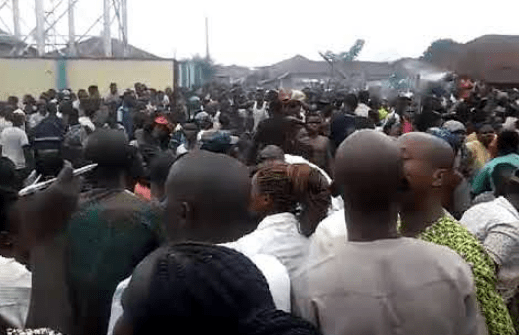 A woman operating a Point of sales machine at Oke Ogba junction off Agagu Road in Akure was on Wednesday killed by some suspected robbers.

The unidentified woman said to be 22-year-old worked as a clerk  before her untimely death.

According to concerned residents, she was shot on the neck by some gunmen who snatched an undisclosed amount of cash from her before fleeing on a motorbike.

The murder occurred barely 24 hours after a middle-aged worker with a publishing company located at Ajipowo was also shot dead in a night robbery.

Robberies have been on the increase recently at Ajipowo/Ogundipe, Shagari village and Ijoka, among others, in Akure.

“Residents of Oke-Ogba community on Agagu Road, Akure were on Wednesday evening thrown into mourning, as shop owners ran for safety when a woman was shot at close range by gunmen.”

It was learnt that the men, who were on a motorcycle, snatched an undisclosed amount from the woman before killing her.

Police spokesman Femi Joseph, a Superintendent of Police (SP), who confirmed the incident, said the command was working towards arresting the suspects.