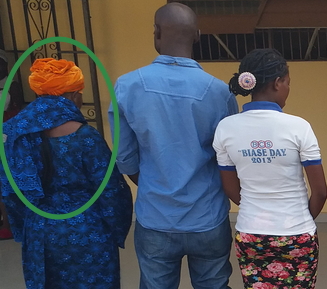 NIS officials in Calabar have arrested a 62-year-old woman who allegedly tricked a girl, Oma Samuel to release her 4-day-old baby girl for trafficking to Lagos.

Madam Angela Nwaelechi was arrested at Calabar international airport yesterday as she was taking the stolen baby to Lagos without her mother.

Her accomplice, a 30-year-old man simply identified as Ifeanyi was also arrested. 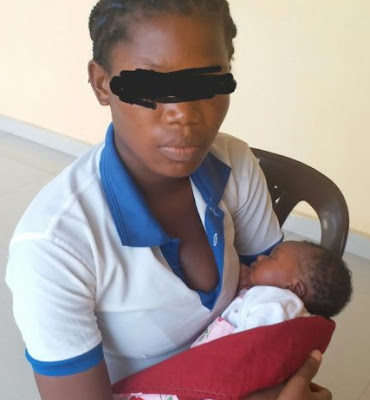 Here is how the victim who has now been reunited with her baby narrated her ordeal:

“I did not agree to give my baby to anyone to take to Lagos, where I would join them later. I was tricked. When I had this pregnancy I did not have a place to stay and I was sleeping outside the church. So one morning I saw this man, Ifeanyi, and he asked me what happened and I explained what happened and he told me to come and stay with him until I put to bed and after that I would take my baby home.

I accepted and stayed with him. And he told me that a woman is looking for a wife to her and I said but I am pregnant already and he said no problem. Later on when I saw the man, who was an imbecile, I declined the offer. They told me the woman has another son that would marry me. But when I thought about it, I said no, that I don’t want to marry anybody again.

“I stayed with him until the day I gave birth and the woman came and I asked who she was and he said she was my mother in law. That same day she wanted to take my baby but I did not accept. Even the women where I gave birth did not accept. So after we stayed until Friday, we blessed the child and I told them I wanted to go back to my place and I packed my things and this woman collected the baby from and we got into a cab. 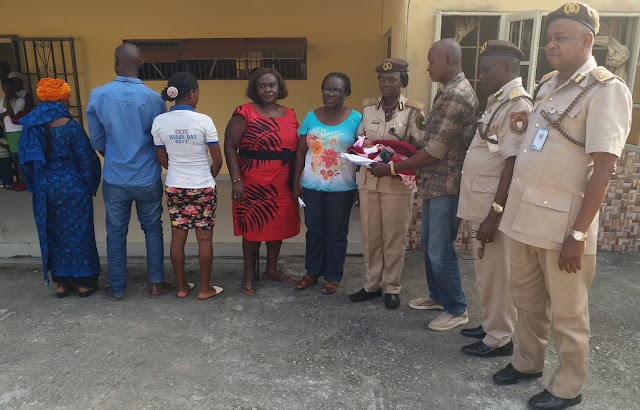 I sat in front and two of them were behind. I noticed through the side mirror that he gave some money to Ifeanyi. I was watching them trying to understand what was happening. They started using their dialect, Igbo, to speak and I was wondering what was going on.

When we got to where I was to stop and go down with my baby, they did not stop there. They drove me somewhere stopped and asked me to go down. I asked of my baby and they said I should wait for them that they want to buy something somewhere and come back with the baby. I went down and they left. They did not come back.

I started crying. The next thing this man rushed and came back and I asked him where my baby was. He took to the market and bought me a phone and bag. He took me and dropped me off in one healing home and gave me N2000 to eat. I just dropped the money and was waiting for the sun to go down so I will go and report to the police with the money.

I was still there when Ifeanyi rushed again to me, with his wife this time, and told me that my baby was going to Lagos with that woman who would take good care of her and when the baby grew to two years, I would go and visit her. This was not what we agreed.

The man then told me that we should go to the airport and if they ask me anything I should say she is my mother in law. Initially I agreed but later on I said no, that she was not my mother in law. That is how we got here.”

The case has been taken over by the National Agency for the Prohibition of Trafficking in Persons in Calabar.

NAPTIP principal officer for Calabar, Mr Victor Odudukudu has transferred the suspects’ files to the appropriate authorities for prosecution.