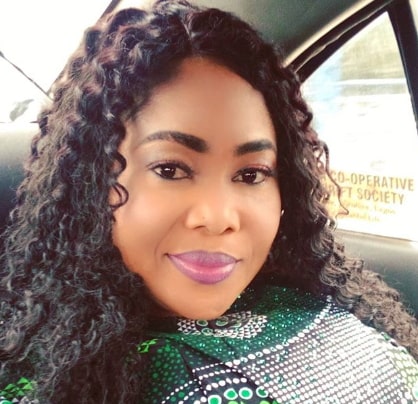 Tell us about your role in the movie ‘Omoniyun’

I played Mama Fiyin. Mama Fiyin is one of those African mothers who have experienced bad marriage. Her first husband left her and she was left to train her daughter Fiyinfolu.

She shut her eyes to the molestation her daughter was going through in the hands of the prince and by the time she wanted to take action, it was already too late. She was just particular about her marriage to the prince.

I can say she was lackadaisical because if she was attentive, she would have noticed the signs. The warning signs were there but she did not notice them.

She was busy looking forward to her marriage to the prince and of course that caused her a lot. It actually cost her daughter.

You played the mother of Fiyinfoluwa whose character was played by Seliat Adebowale, a relative newbie. What was it like?

Surprisingly, I didn’t see her as a newbie because she did quite well and she really put in her best and it was easy for us.

No matter how professional you think you are, you shouldn’t be too full of yourself because you also can make mistake. So I think we all came together to work as a team.

You know we are here to do a job, we have to get it done and we have to do it with love, with mutual respect and that was how it was.

What exactly came to your mind when you read the script for the first time?

This is not my first time of working with Dayo. I know she takes care of details and her stories are always unique. So when I read ‘Omoniyun’ and I saw my character, I was angry with my character.

You are just alone in the world because nobody is going to believe me. It is your world against his. So when I read that part, I said aaah, I wish I could have been able to do something different, like this is the way it’s supposed to be. I wished this was what I was going to do but well, that’s how the story goes.

The fear of stigmatization has lured a lot of women into marriages especially in Nigeria, and Africa by extension.

What would you want to say to women who find themselves in situations like that?

Candidly, I think the African society hasn’t been too fair on women. And in this dispensation, in this generation, women are trying to do things differently.

They are beginning to believe more in themselves than the standard that the society has raised for them. Coming to your question, the truth of the matter is, if the deed has been done, there is nothing we can do other than to live either with the regret or to live with the mistake.

But don’t allow the society to push you into what you do not want. Don’t let them set a standard for your life. If you are not prepared for marriage or if you have not gotten the right partner, you don’t have to stay because of family pressure, peer pressure, societal pressure, or religious pressure too.

There are some churches who just believe, if you are of age, they will match make you and get you married whether you like it or not. And these are the things that now bounce back.

You marry somebody who has temper issues, you begin to get molested, and they beat you up. You marry someone who is impotent, who has hidden it from you, and then you now live with that regret.

You know, there are so many things that happen at the end of the day when you have been pushed or forced or coerced as the case may be, into marriage before you want to. You know, when the deed has been done, you just live with the regret or try and make a correction.

At 41, you still look beautiful, do you still get advances from men?

I am not somebody who is going to be pushed into what I am not ready for. I believe at the right time with the right person, whatever expectations we have will come to pass.

And what makes a man, the right the person for you?

Well, when I see the qualities I desire in a man, I will know I’ve seen them.

What measures do you think the government could take to stem the menace of rape?

They should make the punishment more severe so that it gives people a mental alertness in their heart, and in their mind.

Let the punishment be more severe.. Whoever goes through rape or molestation, I promise you that no matter how young that child or that lady or that boy is, it stays in the memory. It only takes one incident to trigger it. And they will remember.

The flashes of the event will come. So, there is no amount of punishment that they give them that would really minimize the effect on the victim.

The only thing is, let it sink in their hearts and in their head that if they do this and they are caught, this is the punishment. I believe that if they put in more weighty and severe conditions or punishment as it may be, to the offence of rape and child molestation, it will help curb it and reduce it.