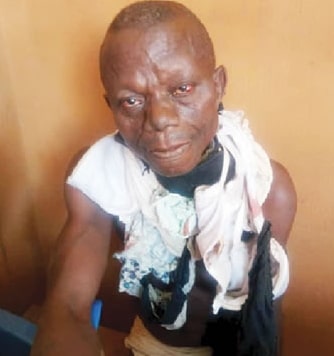 A middle aged man escaped death yesterday after he was caught picking women underwears and used menstrual pad in Akure, the capital state of Ondo state.

The suspect identified as Kayode Michael was rescued from an irate mob preparing to lynch him by the timely arrival of Civil Defence Corps officials.

Michael was beaten blue -black by residents of Danjuma area of Akure Metropolis after he was caught with a nylon bag containing used female underwear, bras and blood-stained sanitary pad.

Eyewitnesses said he was gathering the item to sell to suspected ritualists when he was caught.

“People saw him picking female underwears around the area, but when he was asked what he was doing with them, he could not give a convincing answer so the people thought may be he wanted to use them for rituals. ”

As he could not give answer to the questions put to him, people started beating him, they wanted to kill him but he was later rescued and handed over to the security agents”.