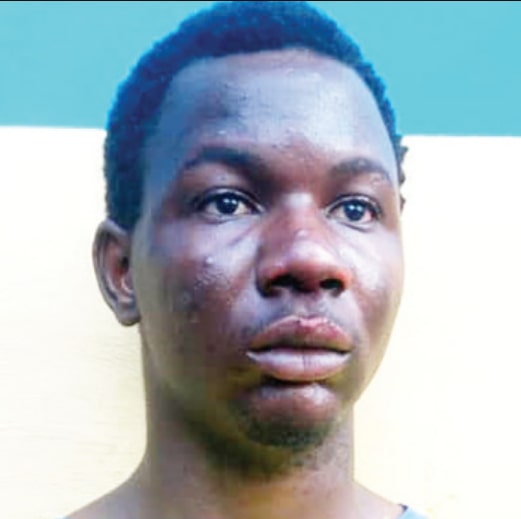 A suspected Yahoo boy identified as Victor Orji, has been arrested by men of the Lagos State Police Command for allegedly setting his girlfriend, Mariam Alabi, ablaze in the Ojo area of the state.

The suspect who accused his girlfriend of infidelity, poured petrol all over her body and allegedly set her ablaze on Saturday, December 7, 2019, at his place of residence on the Army Post Service Housing Estate, opposite the Lagos State University, Ojo.

After Orji had perpetrated the crime, residents of the area apprehended him and rushed Alabi to hospital for treatment.

According to the state Police Public Relations Officer, Bala Elkana, Alabi died on Sunday due to the severe burns she suffered when her lover set her ablaze.

Reacting to the development, Elkana said in a statement that Orji, who had confessed to the crime, said he met Alabi through a hook-up and took her in on the condition that she would quit prostitution but she reneged on the agreement.

He stated that while scrolling through her phone, he saw details of how she spent the night with another man, adding that he became angry and doused her with the petrol he kept for his generator and set her ablaze.

“On Saturday, November 7, 2019, around 11.45am, operatives of the Iba Police Station arrested one Victor Orji, 19, of G54 Army Post Service Housing Estate, Ojo, Lagos, for setting one Mariam Alabi, 24, ablaze. Orji confessed that he used petrol to set the victim ablaze. Orji, who met the victim, on Thursday, February 28, 2019, through a hook-up, said she moved into his house in March and they had been cohabitating as lovers.

“Orji, who is seeking admission into a tertiary institution, has been into Internet fraud for the past three years and the N600,000 used in renting the apartment they live in is proceeds of Internet fraud. Orji said he brought the victim into his house on the condition that she would quit prostitution and stick to him alone.

“However, trouble started on Thursday when she left home to fix her hair and did not return until the following day. She equally left the house on Friday on the pretext of visiting her father, but ended up seeing another man. Orji got to know this while scrolling through her phone on Saturday. He saw her chats, video calls and the naked pictures that she sent to the client she spent the night with. So, he became angry and used the petrol he kept for his generator to set her ablaze.

“A team of detectives visited the scene. Alabi was taken to the Igando General Hospital, where she was admitted but died in the early hours of Sunday, December 8, 2019. The state Commissioner of Police, Hakeem Odumosu, has directed the immediate transfer of the case to the State Criminal Investigation and Intelligence Department, Yaba. The suspect will be charged for murder.”

In another development, men of the state police command have arrested one Hammed Amusa for allegedly defiling a 17-year-old girl in the Bariga area of the state.

Elkana said when the victim was taken to the Mirabel Centre for treatment, medical examination revealed that she was pregnant but it had been aborted.

While detectives were said to be on the trail of the nurse, who conducted the abortion, the PPRO said Odumosu had ordered that the arrested suspect be charged.

Elkana stated, “On Friday, November 6, 2019, around 4.39pm, the Bariga Police Station received a complaint that one Amusa Hammed, 22, of No 7 Dassy Castro Street, off Odunsi Street, Bariga, defiled a 17-year-old girl. The girl was taken to the Mirabel Centre in Ikeja for treatment and forensic examination. The medical report showed that she was pregnant and had an abortion.

“The suspect was arrested by detectives from the Family Support Unit and he confessed to the crime. The nurse, who helped him in procuring the abortion, was identified. Detectives are on her trail. The Commissioner of Police, Lagos State, Hakeem Odumosu, ordered that the suspect be charged.”

“I’m Still A Dangerous Fighter, The 3rd Fight Will Be Different” – Ruiz
Strong Words For Those Making Ignorant Generalizations About Africa